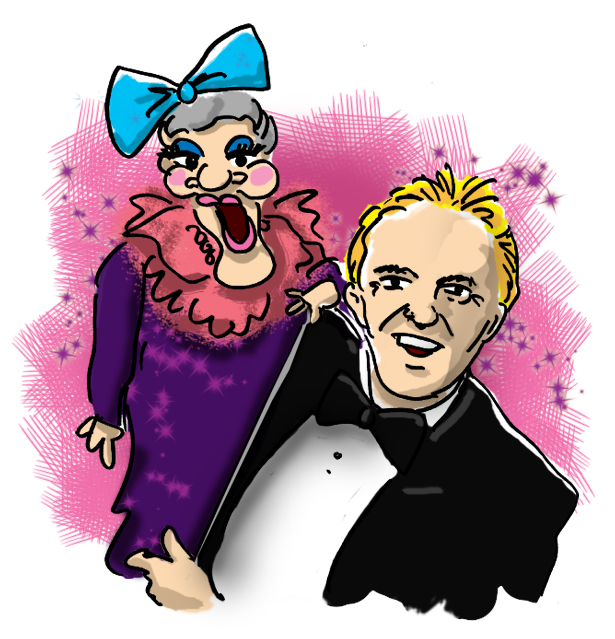 Wayland Flowers began making puppets by hand. A shy child, he was able to express himself through his puppets. One in particular, a loudmouth, crass “old broad” named Madame was his favorite. He patterned the character after a restaurant hostess famous for her outrageous eye shadow and her extremely colorful language.

He landed his first professional job in a play called Kumquats, in which his creation took the persona of a foul-mouthed Mother Goose. When the play closed, Wayland traveled around the gay bars in New York City, telling jokes with Madame for drinks and tips. He decided to move to Hollywood to see how far this show biz life could take him.

Wayland and Madame made their television debut on the Andy Williams variety show, telling a toned down version of the brash routine he delivered in New York. Soon he was booked in Las Vegas showrooms and made numerous appearances on talk shows, movies, even doing his own Showtime special Madame in Manhattan. Wayland holds the distinction of answering the last question on the game show Hollywood Squares in its final incarnation with Peter Marshall as host. (Wayland had taken over the coveted “center square” after the late Paul Lynde.)

In 1983, Wayland and Madame starred in a syndicated sitcom called Madame’s Place. The show costarred Johnny Haymer (Sgt. Zale on M*A*S*H) as Madame’s butler, Susan Tolsky (Biddie on Here Come the Brides) as her secretary and Judy Landers (an excuse to get men to watch the show) as Madame’s niece. A young Corey Feldman appeared as Madame’s neighbor. The premise of the series was a behind-the-scenes look at a television talk show that Madame hosted. The series was canceled after one season. Wayland was never seen on camera. Almost immediately, Wayland joined the musical showcase series Solid Gold and stayed for four years.

Over the years, Wayland developed a heavy cocaine habit. It was reported that an incoherent Wayland was carried on and off the Solid Gold set on many occasions. His drug habit worsened and, to make things even worse, he was diagnosed with HIV. In 1988, Wayland collapsed on stage during a performance in Lake Tahoe. He died a few months later at the age of  48.

Ten years after Wayland’s death another puppeteer took the Madame character back to the stage. In October 2014, a Kickstarter campaign was launched to finance a comeback tour for Madame. The goal of $50,000 was met with less than ten percent. The Madame puppet is currently on display at The Center for Puppetry Arts in Atlanta.