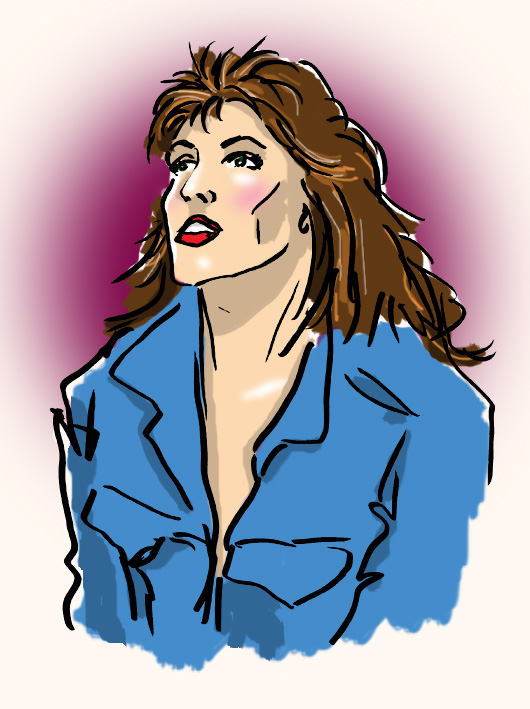 After a stint as a backup singer on for Leonard Cohen on an early 70s European tour, Laura Branigan knew she wanted a career as a professional singer.

Impressed by her four-octave range, Atlantic Records chief Ahmet Ertegun signed Laura to a contract. She released her debut album, a collection of up-beat pop songs and ballads, in 1982. The record’s lead single, “Gloria,” earned Laura a Grammy nomination. It was featured in the popular film Flashdance, although it did not appear on the soundtrack album. She was a guest star on the 1983 edition of Dick Clark’s New Year’s Rockin’ Eve, where she performed her hits “How am I Supposed to Live Without You” and “Solitaire.”

The 80s saw Laura’s greatest success with a slew of albums and singles, including her biggest hit “Self Control” and guest appearances on popular TV series like CHiPs and Knight Rider. In the 90s, Laura concentrated on versions of songs made famous by other artists, including Vicki Sue Robinson’s “Turn the Beat Around.”

In 2002, Laura performed the title role in Love, Janis, an off-Broadway musical based on the life of Janis Joplin. Her time with the production was short-lived, as a misunderstanding in filing with the Actors’ Union forced her to drop out.

Laura died in her sleep, in 2004, of a previously undetected cerebral aneurysm. She had been experiencing regular headaches, but did not seek medical attention. Laura was 52. Her management company still maintains her musical catalog and has released three “Greatest Hits” packages, as well as re-releases of all of her studio albums, in the years since her death.

Stig-Åke Persson is a devoted fan of Miss Branigan, standing up for the truth about her life (and death). Mr. Persson was adamant that I change her age at the time of her death, citing his own research as the source. Hey, it’s the internet. Who am I to argue? If you want to know everything there is to know about Laura Branigan, I suggest you peruse this little corner of Pintrest: https://se.pinterest.com/born53/boards/.  According to his convoluted tag line, “This site has only one (1) purpose, to show That Laura Ann Branigan was born in 1952, Mt Kisco, Westchester County. Everything else is wrong.” He is very up front in stating that “everything else is wrong.” (Mr. Persson overstepped my kindness and asked to have his Laura Branigan Facebook page posted here as well. Here it is, but you are trying my already-limited patience: https://www.facebook.com/LauraBraniganForever)

When you get there, tell ’em Josh sent you.