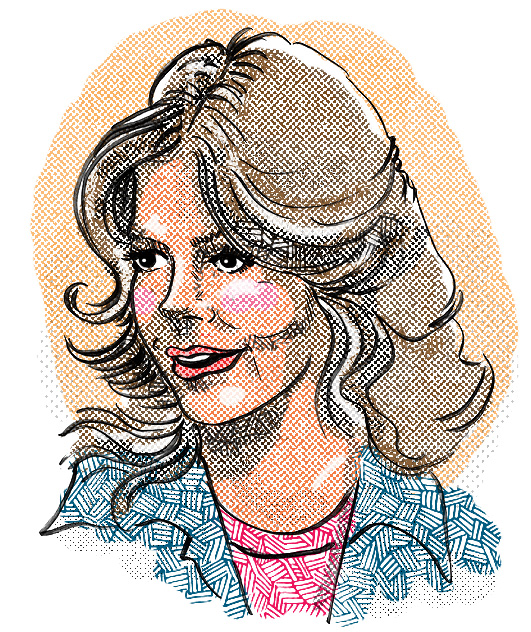 Debralee Scott kicked off her career as a nude corpse in the Clint Eastwood cop thriller Dirty Harry. Two years later, she was sidling up to Harrison Ford in his “piss yellow-puke green” hot rod in George Lucas’ American Graffiti.

In 1974, the feisty, freckled redhead with the adorable overbite landed a regular supporting role in the fledgling drama Sons and Daughters (not to be confused with the four other series by the same name). The show, set in the 1950s, chronicled the love life of  high school sweethearts played by Gary Frank and Glynnis O’Connor. The show lasted nine episodes, being crushed by ratings giant Little House on the Prairie.

After appearing in guest spots on episodic television, Debralee was cast as Louise Lasser’s little sister in the syndicated soap-opera send-up Mary Hartman, Mary Hartman. She was instantly recognizable from her appearances in 288 episodes. At the same time, she introduced the recurring character “Rosalie ‘Hotsy’ Totsy,” the ambiguously-slutty flirt on sophomoric sitcom Welcome Back, Kotter. With her star on the rise, Debralee made the obligatory stop on The Love Boat. Soon, she was snapped up to play Donna Pescow’s sister in her new sitcom Angie.

Debralee soon became a welcome participant on TV game shows, displaying a heretofore unknown wit and intelligence. She was a staple on Chain Reaction, Password Plus and the many incarnations of The Match Game. On an episode of Password Plus, she nearly (and unknowingly) exposed her breasts when several buttons popped during a particularly animated attempt at delivering a clue, thus becoming a “wardrobe malfunction” 25 years before Janet Jackson’s Super Bowl fiasco made the term popular.  She famously joined in on a celebrity protest over the specifics of a judge’s call on a raucous 1977 episode of The Match Game.

As the 70s came to a close, Debralee auditioned for the role of “Marty” in the film adaptation of the musical Grease. She lost the role to Dinah Manoff, despite being more recognizable and closer in age to the other cast members. Still she persevered with parts in films and even a Donna Summer TV special alongside cult actress and Andy Warhol cohort Pat Ast (best known for her role in Reform School Girls). In the 80s, Debralee gave a quick, but funny turn in two installments of the Police Academy film franchise.

The 1990s brought a career change when she teamed up with her sister (and former actress) Jeri to form Empowered Artists, a talent management agency. The siblings were very successful.

In early 2001, Debralee was engaged to New York City police officer John Levi, with a wedding planned early the following year. In September 2001, Officer Levi was killed while on duty at the World Trade Center. He was investigating evidence in the basement when the buildings collapsed. Debralee was devastated and heartbroken.

In 2005, she moved to Florida to live with and take care of her sister Scotty who was battling emphysema. Mysteriously, Debralee, herself, fell ill and was admitted to the hospital where she lapsed into a coma for several days. She woke up on her own and was released. A few days later, just after her 52nd birthday, Debralee took a nap on her sister’s sofa and never woke up.