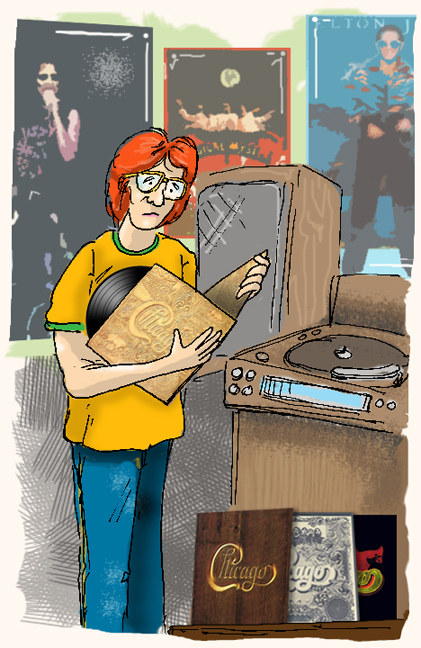 “I’ve been searchin’
So long
To find an answer”
— “I’ve Been Searching So Long” by Jimmy Pankow, as recorded by Chicago

In early 1974, I would go every Saturday afternoon to Art Levin’s apartment in Northeast Philadelphia for Bar Mitzvah lessons. Art was the son of the rabbi that married my parents in 1955. He was a cool guy. He wore bell-bottom jeans and he had long, thick sideburns like Tom Jones. Art had a cool apartment, too, with beads hanging from the ceiling, dividing the living room from the kitchen, thick green shag carpeting and multicolor posters on the walls. He also had the patience of a saint, because that Hebrew stuff just wasn’t clicking in my nearly thirteen-year-old brain.  I could sense his utter frustration when I tripped over the week’s lesson, mispronouncing words and chanting passages with the wrong tune. He tried his best to be kind but firm when he explained that I needed to concentrate and study if I was expected to be ready for my August Bar Mitzvah date. It was all he could do to keep himself from blurting out that I was fucked.

As August approached, my parents – the world’s worst managers of household income – sat me down and told me that they couldn’t afford a Bar Mitzvah on the level of my brother’s four years earlier. (My brother’s shindig was a full-blown, tuxedo-and-gown affair with color-coordinated tablecloths and napkins, a five-piece band, and an extended guest list that included everyone from relatives and neighbors to my father’s co-workers to my grandmother’s butcher.  It must have brought my parents’ bank account to its knees and, four years later, no sign of recovery was in sight.) As a consolation, they offered me a series of backyard barbecues – one each for Mom’s family and Dad’s family (never the twain shall meet), one for family friends and a “record hop” for my friends. My mom spun a plan of renting a small room in the rear of the local Baskin-Robbins ice cream store and hiring a DJ to spin records. I could invite all my friends from elementary school and those that I met in the awkward transition into seventh grade — and that included girls. As a bonus, I was relieved from delivering a portion of the Torah before God and the aforementioned groups. But, I’d still get presents, right? I had to confirm.

The night of my own, personal dance was electric. The DJ arrived early to set up his turntable and small light show in the cramped quarters of the Baskin-Robbins “Party Room.” The walls were festooned with twisted paper streamers and colorful balloons. My parents’ folding aluminum banquet table was camouflaged with a plastic tablecloth and laden with bowls of popcorn, pretzels and potato chips. A small assembly of Coke and root beer occupied its own corner, surrounded by stacks of waxed cups and a small ice bucket (possibly also my mother’s).

Soon guests arrived. They were initially greeted by my “I-think-I’m-hip” Aunt Claire, until my mom tactfully asked her to take a backseat. The music was welcoming and after a bit of uneasiness that relegated the sexes to opposite sides of the room, the mingling – and then dancing – began. The room was filled with the light rock of Elton John, Paul Simon and Loggins & Messina. As the evening wore on, the DJ got daring, introducing these sheltered Jewish youths to the sultry funk of Marvin Gaye and Billy Preston. In the dim light of the room, I could make out darting eyes and hesitant clutching during Barry White’s “I’m Gonna Love You Just a Little More, Baby.” Several times during the course of the party, the dancing was interrupted by some hokey games with prizes of albums awarded to the winners. To this day, I cannot figure out how my Aunt Claire ended up going home with a copy of Stevie Wonder’s Fulfillingness‘ First Finale.

After ice cream cake was served, everyone gathered around to watch me open my gifts. The first one I opened was a copy of Chicago VII. Now, I had been listening to all kinds of music from the time I was very young. I grew up on The Beatles and their subsequent solo efforts. By the time I was twelve, I was listening to the pop-rock sounds of Three Dog Night, Paul Revere and The Raiders and any number of radio-friendly one-hit wonders like Brewer and Shipley and Edison Lighthouse. I even had my interests piqued by the unholy seductive compositions of Mr. Alice Cooper. But, I never liked Chicago. Ever. You know who listened to Chicago? JAPs. That’s right — the young, snotty, entitled girls that we dismissed as “Jewish American Princesses.” For some reason, unknown to me, Chicago’s pseudo-jazz opuses appealed to the musical sensibilities of the elitist young Jewess. The endless waltz of “Colour My World” always drove me crazy. Trombones didn’t belong in rock music. What was wrong with these guys and what was it about their music that drove Jewish girls wild?

I tore the wrapping off of another gift. It was a sweater — one I would wear once, then hide in a bottom drawer of my bureau. I opened the next gift. It was another copy of Chicago VII.  At the end of the night, I had received four copies of Chicago VII and a copy of Chicago VI, the band’s release from the previous year. I suppose that guest had shopped after the previous four and was left with few options. It was probably someone named Stacy or Wendi (with an “I”). I knew a few of those.

In hindsight, I had a pretty good time. Five albums from a band you don’t like sure beats studying for your Bar Mitzvah.