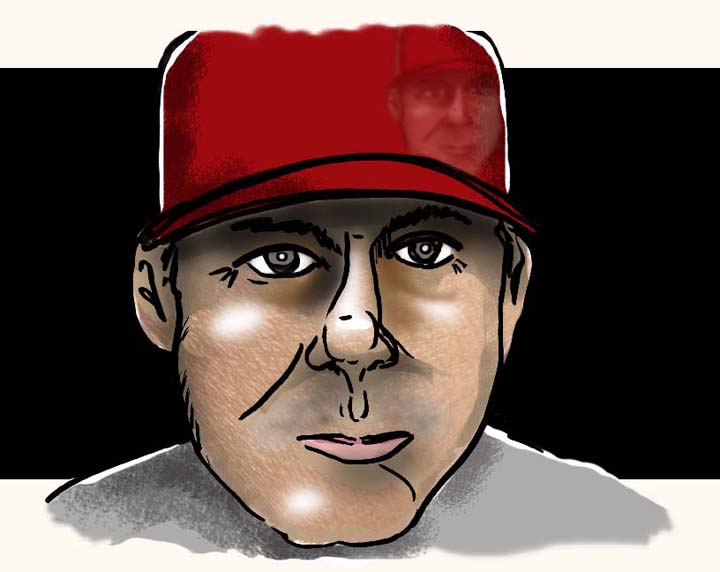 “Hey, Farney, I don’t know if that was you who really caught that ball, but that was pretty good if it was.”

After an unremarkable debut with the Toronto Blue Jays, Ryan Freel came into his own with a free agency signing with the Cincinnati Reds. Ryan showed himself to be a pretty reliable and scrappy utility player. While he was able to play infield positions, he felt more at home in the outfield where the large expanses of grass allowed for diving catches. At times, it seemed that Ryan was more concerned for the ball than his own safety, often crashing into walls and colliding with teammates. He even dove into the stands at Dodger Stadium trying to make a play. Although he was not an everyday player, Cincinnati fans embraced him during his five seasons with the Reds.

In 2007, during a game against the Pittsburgh Pirates, Ryan smashed into fellow outfielder Norris Hopper and ended up sprawled across the warning track. He was transported to a local hospital, having never lost consciousness, but still shaken. He began rehab two weeks after the incident, but began experiencing regular headaches. His rehab was put on hold. He eventually rejoined to the team, only to return to the disabled list with torn cartilage in his knee.

In 2009, after being traded to the Baltimore Orioles, Ryan was hit in the head by an errant throw trying to pick him off in a steal attempt at second base. Again, he was put on the DL. One year and two teams later, Ryan retired. He explained in an interview that, over the course of his brief career, he had suffered nine or ten concussions.

And then there was Farney.

Farney, according to Ryan, was the imaginary man that lived in his head. He often talked with Farney about strategy and various plays throughout games. He would sometimes credit Farney with a good hit or a spectacular catch. Sometimes Farney would give the credit to Ryan.

On December 22, 2012, Farney was forever silenced when Ryan killed himself with a single shotgun blast. The results of a family-requested autopsy revealed that Ryan suffered from Stage II CTE (chronic traumatic encephalopathy), also know as “punch drunk syndrome,” a condition that usually affects boxers. Ryan was the first Major League Baseball player to be diagnosed with the ailment.