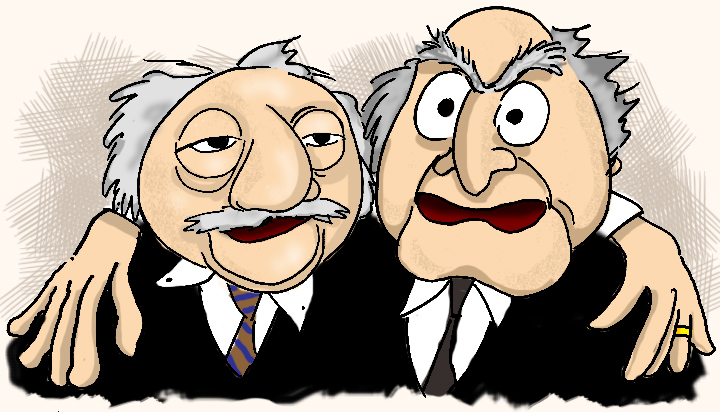 I took my inspiration from the cover of this week’s New Yorker magazine. The cover illustration depicts a nationally recognized couple celebrating the Supreme Court’s decision that portions of the Defense of Marriage Act (DOMA) withholding federal benefits from same-sex marriages are unconstitutional. DOMA was signed into law in 1996 by President Bill Clinton.

Statler and Waldorf have occupied the left stage-side balcony of The Muppet Theater since 1975. From that lofty vantage point, the pair heckled every song, dance and comedy routine performed by their fellow Muppets, relishing in each other’s one-upsmanship. They take particular pride in hurling insults at poor Fozzie Bear in his efforts to make the audience laugh.

The pair has appeared on every episode of The Muppet Show, with one exception. One very telling exception. On a 1979 episode featuring special guest jazz trumpeter Dizzy Gillespie, Waldorf informs the audience that Statler is ill and cannot make it to the evening’s performance. However, Waldorf introduces his “wife,” Astoria, who will be taking his colleague’s place. When Astoria appears, it is obviously Statler in drag.

Although Bert and Ernie share a bedroom, they do not share a bed. Perhaps, now they can with pride.

Statler and Waldorf are always snuggled close in the intimacy of their darkened balcony.  Hopefully, now, they can stand proudly in the spotlight… y’know, if they had legs.

I wish the four of them all the best.