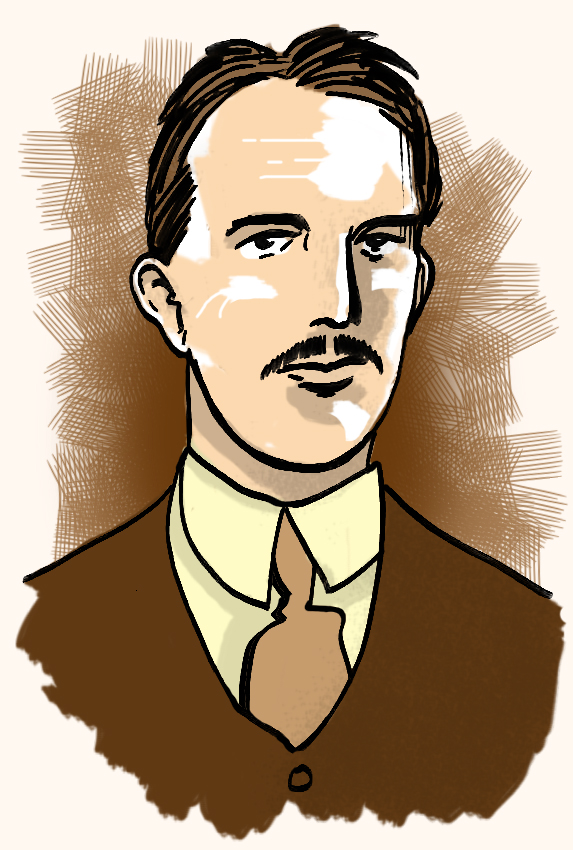 At 20 years old, Kermit Roosevelt — the second son of President Theodore Roosevelt — left Harvard University to accompany his father on an African safari. Upon returning, he re-enrolled and completed four years worth of studies in just two and a half years. While at Harvard, he was a member of the prestigious, though secretive, Porcellian Club.

Following in his father’s adventurous footsteps, he set out again in 1913 for an expedition into Brazil’s Amazon River Basin jungles. Once again accompanied by his father and Brazilian military officer Cândido Rondon, Kermit explored the rain forest and the River of Doubt, later renamed Rio Roosevelt. Over a period of two years, the party lead by Kermit, navigated and charted over one thousand kilometers of previously-unexplored land. Despite being poorly prepared and inadequately equipped, they fared and overcame adverse weather, health problems and even several deaths. The Roosevelts contracted malaria during the journey. Thanks to Kermit’s survivalist instinct (specifically his rope-handling and canoe-rowing prowess), he battled through his own sickness to save the elder Roosevelt’s life. Kermit chronicled the trek in his book, Through the Brazilian Wilderness.

After returning from South America, Kermit married Belle Willard, daughter of the U.S. ambassador to Spain. Their ceremony had been postponed by the trip to the Amazonian jungle.

Kermit was a decorated captain in World War I, serving in Mesopotamia (modern-day Iraq). He mastered the Arabic language and served as a military translator with the locals.

After the war, Kermit founded the Roosevelt Steamship Company as well as the United States Lines*.

In 1925, Kermit and his brother Ted Jr. embarked on a hunting expedition in the Himalayas. They transversed the Kashmir Valley and followed the ancient Silk Route into China. The pair returned with several trophies that are currently part of the collection of the Field Museum of Natural History in Chicago.

With help from his friend Winston Churchill, Kermit became a Second Lieutenant in the British Army. He led battles in Finland, Norway and North Africa, until an enlarged liver (brought on by years of heavy drinking) sidelined his commission. He returned to the United States and sunk deeper into alcoholism and depression. His cousin, President Franklin Roosevelt, made Kermit a major in the US Army and transferred him to Fort Richardson, Alaska. There, Kermit formed a militia with Eskimos and Aleuts.

In 1943,  Dr. Sanford Couch Monroe discovered Kermit in his Alaskan residence with a revolver by his side and a single, self-inflicted gunshot in his head. The official cause of death was released to the public as “heart attack.” Kermit, who was 53, left no suicide note.

* In 1952 (a decade after Kermit Roosevelt’s death), the United States Lines built the luxury passenger ship, The SS United States. The ship is the largest ocean liner constructed entirely in the US and still holds the distinction of being the fastest ocean liner to cross the Atlantic in either direction. The SS United States is featured prominently in the films, Bon Voyage, Munster Go Home, West Side Story and Gentlemen Marry Brunettes. In 1996, the ship was docked at Pier 82 on the Delaware River in Philadelphia. Ownership has been transferred several times and restoration plans were made and postponed and efforts are currently being made to save the vessel from the scrap heap as the once-great ship rots and rusts away.