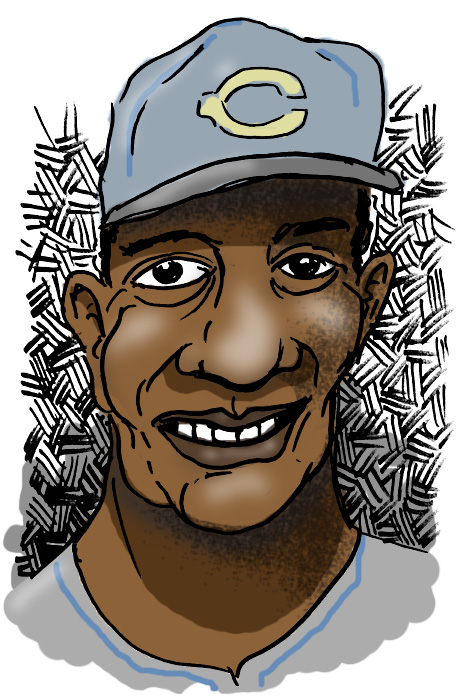 In 1946, Abe Saperstein, enjoying success from his exhibition basketball team The Harlem Globetrotters, decided to try his hand at baseball. In the same fashion, he assembled a squad of barnstorming all-stars called the Cincinnati Crescents. He signed 6′ 4″ Luke Easter to play first base. Luke was thrilled, as he was only able to play baseball in school, since his native St. Louis had no Negro League franchise.

After a year with the Crescents, Luke was signed by the Homestead Grays. In 1948, Luke led the Negro Leagues in home runs and helped the Grays win the Negro World Series in 1948, the final series for the league.

Luke’s stellar performance in the World Series caught the attention of flamboyant owner Bill Veeck. He signed Luke to a contract with his Cleveland Indians. Starting with the Indians’ Pacific Coast affiliate, Luke hit 22 home runs and was promoted to the big leagues. Unfortunately, he hit a slump, going 21 games without a homer. But the Indians believed in him and traded their starting first baseman to make a spot in the roster for Luke. The move paid off and Luke rewarded his team with three consecutive power-hitting, run-producing seasons. He also hit the longest home run in the history of Cleveland’s Municipal Stadium, a 477-foot shot over the right field scoreboard. The distance record stood until 1960 when Mickey Mantle accomplished the feat. Luke’s legendary home runs became known locally as “Easter Eggs.” A fan once told Luke he had seen his longest home run in person, to which Luke replied, “If it came down, it wasn’t my longest.”

In 1953, Luke broke his foot and never regained his momentum. He spent the majority of 1954 in the minors. At 39 years of age, he left the major leagues and bounced around regional independent leagues until he finally retired for good in 1964.

Putting his baseball career behind him, Luke moved to Ohio and took a job as head union steward for the Aircraft Workers Alliance at TRW Inc. On March 29, 1979, Luke was approached by two armed men in the parking lot of the Cleveland Trust Company Bank. He had just cashed TRW payroll checks and was carrying approximately $5000 in cash …and he had no intention of giving the money up. The two men had other plans. They shot Luke twice in the chest at close range. Luke was already dead when he arrived at the hospital. He was 63 years old.