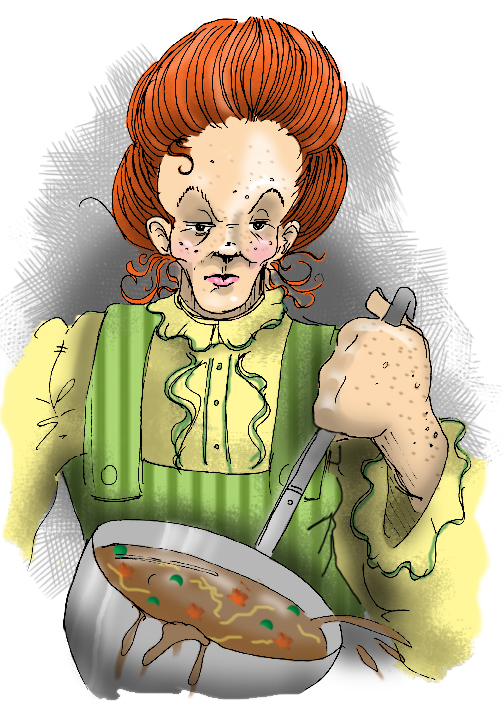 Mary Mallon was an uneducated, hot-tempered Irish immigrant, but, boy, could she cook.

Mary came to the United States in 1884 and worked a succession of menial jobs until she discovered her talents in the kitchen. In 1900, she found employment as the personal cook for a family in Westchester County, just outside of Manhattan. She prepared all of the family’s meals, including her famously delicious peach ice cream. Within two weeks of her employment, several members of the family came down with typhoid fever and Mary left them.

She began working for another family, this time in Oyster Bay, Long Island, but within two weeks, ten of the eleven members of the household were hospitalized with typhoid fever. She secured cooking positions at three more homes, all with similar results.

George Soper, a sanitation expert and medical investigator began researching Mary’s trail of sickness. Always a few steps behind, Soper interviewed Mary’s employers and their families until he finally tracked her down in 1907. He attempted to question her, but she was uncooperative. Actually, she was downright nasty. Mary angrily brushed off the notion of being the source of any sickness, since she never exhibited any symptoms.  Regardless of Mary’s position, Soper published his report in The Journal of the American Medical Association.  This prompted The New York Department of Health to send Dr. Sara Josephine Baker, an early advocate for public health, to talk to Mary. Citing Mary as a source of typhoid, Dr. Baker had two police officers take an obstinate Mary into custody.

Mary was forcibly subjected to testing, including urine and stool samples. Results showed that her gallbladder was teeming with typhoid salmonella. She admitted that she rarely washed her hands while cooking, claiming she never felt that it was necessary. A subsequent report published in The Journal of the American Medical Association  referred to her as “Typhoid Mary,” and she was immediately sent into quarantine at a clinic located on North Brother Island, near Riker’s Island. Mary protested, maintaining that she couldn’t possibly carry any disease since she showed no symptoms.

In 1910, Mary was released when the Department of Health decided that disease carriers should no longer be held in isolation. Mary promised to abandon her career in cooking and got a job doing laundry. But, soon, using the alias “Mary Brown,” she returned to the kitchen. For the next five years, she worked in various kitchens, leaving numerous cases of typhoid in her wake. After an outbreak of typhoid fever at New York’s Sloane Hospital for Women, George Soper discovered that a red-haired, immigrant cook had recently left the facility. Public health officials caught Mary a few months later and returned her to the facility on North Brother Island. She remained there for the rest of her life, giving interviews to curious reporters and investigators and becoming a minor celebrity.

Mary died in 1938 from complications of a stroke. An autopsy revealed live typhoid bacteria in her gallbladder. Her remains were cremated at the autopsy’s conclusion.