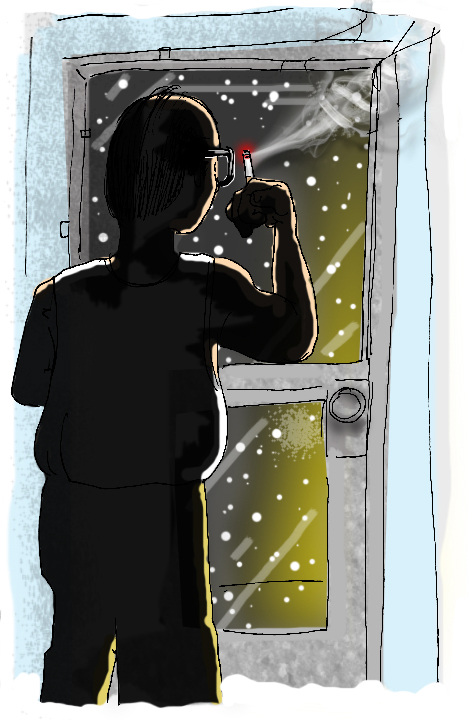 My dad and snow had a horrible relationship. My dad hated snow and, sometimes, it seemed as though snow hated him right back.

My father was a guy who was pretty much set in his ways. He woke up the same time everyday. He struggled his way out of bed and braced his bent frame on the edge of his bureau. A hacking cough rattled through his lungs as he instinctively reached for his first cigarette of the day — the first of many. He’d dress in the same ritual order — shirt (summer: white; short-sleeved. winter: heavy flannel), socks, shoes and then he’d wrestle his work pants over his already shoe-clad feet.

He’d shuffle to the kitchen and pour a heaping portion of Kellogg’s Corn Flakes into a bowl. Then, with a light sprinkle of sugar, a splash of milk and another cigarette, he’d polish off that cereal in a matter of seconds, a trait he picked up in the US Navy. A trait he never shook. After his hurried breakfast, he’d thread his arms through the sleeves of his coat, light another cigarette and head out to work. My father was a meat cutter and over a period of 50 years, he plied his trade at many locations, but his duties always remained the same. My dad was a creature of habit. Everything always remained the same.

When my father arrived home after work, he’d eat dinner (it had better be ready!), separating each course with a cigarette. Then, he’d plop himself down in his favorite chair (off-limits to anyone else’s ass) and watch television, raging through a pack or so of cigarettes until the eleven o’clock news broadcast. For nine months out of the year, the news was just the final part of the day before my dad hit the sack and started the whole procedure again. But in the winter months, watching the weather segment of the news was a tense, nail-biting adventure in stress. Especially when the forecast included the threat of snow.

Snow was the monkey wrench. The fly in the ointment. The thorn in my dad’s side.

A typical December weather report would throw my father into a rabid frenzy. The smiling TV weatherman would joyfully point to cold fronts stretching across the northeastern portion of the map and indicate the possibility of some winter precipitation and accumulation.  My father would frown and spew one obscenity after another at this bastard who was deliberately conjuring a blizzard to fuck up my father’s daily routine.

“Sure!,” he’d holler at the television, “Joke about it, you son-of-a-bitch-bastard! Joke about the goddamn snow! It’s a goddamn joke to you!” And then my father’s wintertime ritual would begin. He’d stand in our darkened living room with the door opened, but still shielded from the elements by an aluminum storm door. With a cigarette smoldering between the butcher knife-gnarled fingers of his hand, he stare up at the sky, using a nearby streetlight as a gauge for the pending snow storm. And he’d curse.

Soon the first few flakes of snow fluttered through that shaft of light and the cursing increased. “Shit. Shit. Shit. Shit. Shit.,” he muttered rapid-fire like a tommy gun. He puffed angrily as the falling crystals formed a thin blanket across our lawn and our neighbor’s lawns. Soon, the black surface of the street disappeared under a soft layer of snow and my father’s mind frantically filled with emergency plans. Immediately, he grabbed a small overnight bag and began stuffing it with a few days worth of clothing. He informed my mother that, in case it got “really bad,” he’d have to book a hotel room, despite the fact that we lived a mere twenty minute drive from the supermarket that was his employ and we lived in the fifth largest city in the country, not a remote country shire miles from civilization. Philadelphia has dealt with snow for years and, although it is subjected to much criticism, the Streets Department have always done a pretty good job. But, as far as my dad was concerned, we lived in Nome, Alaska.

So, there was my dad. At the door. Staring out the window and cursing the snow until he finally relinquished his post and went to bed.

The next morning, he dressed as he did the day before except for boots instead of shoes, but still putting them on before his pants. Skipping breakfast, but not a cigarette, he pulled on his gloves and began cleaning off his car with the nearly-bare brush he kept in the trunk next to a smashed box of dirty Kleenex. Then, my dad positioned himself behind the steering wheel and drove to work, his hands sporting white-knuckles, the speedometer never teetering above 25. The driving was, as he always said, “treacherous.”

I seem to have inherited my dad’s dislike of winter weather, in spite of taking the train to work for the past five years. Realistically, snow isn’t a problem for me, since they never let me operate the train. But, I still don’t like snow. My son is not fond of snow either. And he doesn’t even drive.