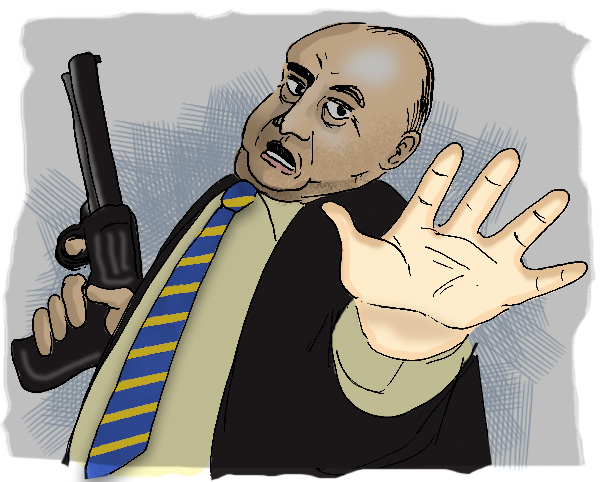 Former Pennsylvania state senator R. Budd Dwyer was elected Pennsylvania state treasurer in 1981. Around the time that Dwyer took office, a huge clerical error affecting state withholding tax (FICA, which contributes to Social Security and Medicare) was discovered by Pennsylvania auditors. The effects were enormous with records showing that state workers overpaid in the millions of dollars. The Pennsylvania State Treasury, with Dwyer at the helm, began to accept bids from accounting firms to sort out the mistake and determine the amount of refunds due to state employees.

An investigation revealed an alleged agreement by Dwyer to receive $300,000 in kickbacks after Torquato’s firm was awarded the contract. In exchange for lighter sentences, Torquato and his attorney, William Smith, both pled guilty to bribery and testified against Dwyer and former Pennsylvania GOP chairman Bob Asher. Dwyer vehemently denied all charges and turned down a plea bargain, opting instead to go to a full trial. After a lengthy trail, in which alleged co-conspirator’s names were withheld or stricken from court records, R. Budd Dwyer, still professing his innocence, was found guilty and convicted of accepting a bribe. Under Pennsylvania law, he was permitted to serve as treasurer until his sentencing on January 23, 1987. He faced a $300,000 fine and up to 55 years in prison.

On January 22, 1987, 24 hours before U.S. District Court Judge Malcolm Muir was to decide Dwyer’s fate, the disgraced, soon-to-be former treasurer called a press conference. Looking nervous before a roomful of reporters, journalists, staff and television cameras, he approached the podium and offered a rambling, at times incoherent, dissertation highlighting his career, the bribery charges and his innocence. With restrained anger in his voice, he berated and criticized the justice system and condemned his own condemnation. He announced his refusal to resign and handed manila envelopes to each of three members of his staff who were standing nearby.

Above the collective gasp from the crowd, Dwyer waved his free hand and advised “those who might be affected, please leave the room.” While some ran from the cramped quarters, others tried to approach the gun-wielding Dwyer, to which he warned, “Don’t. Don’t. This will hurt someone.” Then, in one motion, Dwyer inserted the massive gun barrel into his open mouth, pulled the trigger and blew a hole through the back of his head — a hole through which Dwyer’s brain and skull fragments exited with great force, followed by a large splattering of blood. Dwyer crumpled to the floor as photographers snapped pictures and several news cameramen trained their unwavering recording devices on the event — live, as it unfolded.

Dwyer’s suicide was broadcast and rebroadcast throughout the next several hours. Some stations edited the scene heavily, while others opted to show it in all its horrific glory.

The envelopes that Dwyer distributed before ending his life contained copies of a carefully written suicide note, parts of which he read at the press conference. The note ended with: “Please make sure that the sacrifice of my life is not in vain.” Since her husband died while still in office, Dwyer’s widow was entitled to full survivor benefits, including a state-provided pension.