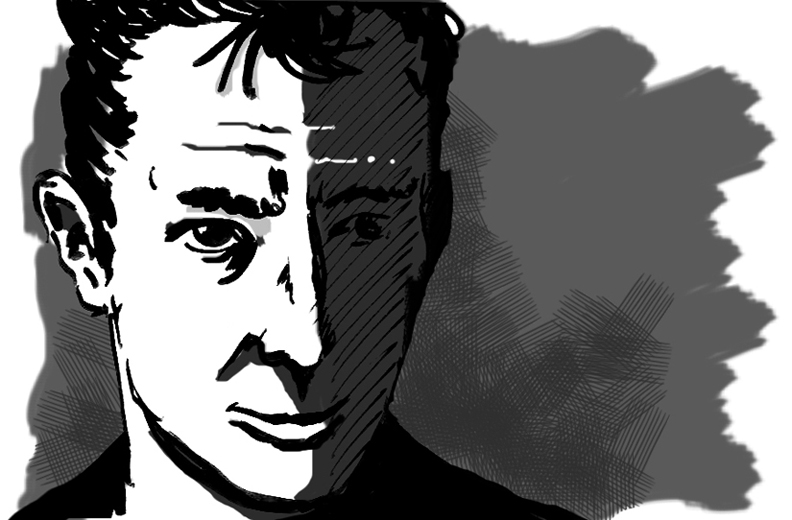 Jack Kerouac carried a notebook with him wherever he went. He chronicled his life, his actions, his feelings… everything. He traveled across the United States and Mexico  meeting people, observing their lives and writing about what he saw. His journeys and scribblings became the basis for his most famous book, On the Road.  Viking Press, the publishing company that finally accepted Jack’s novel, demanded extensive editing to the piece before publication. Jack complied but this led to heavy criticism of his spontaneous writing style.

Suddenly, Jack was a celebrity. On the Road  was an instant hit and other publishing firms fought for Jack’s stockpile of previously rejected works. Jack was hailed as the voice of a new generation. Jack dubbed it ‘The Beat Generation,” describing a person with no money and no prospects  as in “I’m beat down to my socks!” This new found fame didn’t sit well with Jack. As a way to deal with his unwelcomed notoriety, his drug and alcohol use increased.

CBS premiered the television series Route 66  in 1960. The program followed the adventures of two characters that bore a striking resemblance to the two protagonists in On the Road.  Despite the obvious sanitizing for television, the similarities in the characters and the depiction of the stories were too close for Jack’s comfort. Jack threatened to sue series creator Stirling Silliphant, CBS, the Screen Gems TV production company, and sponsor Chevrolet, but was inexplicably talked out of pursuing the lawsuit.

In 1968, Jack appeared on William Buckley’s Firing Line  to discuss 60s counterculture. The visibly drunk Jack did his best to field questions from the famously acerbic Buckley. It was Jack’s last television appearance.

Early in the morning of October 20, 1969, Jack began to feel ill after downing a shot of whiskey and glass of malt liquor. His wife was awakened by calls of “Stella, I’m bleeding.” She discovered Jack on the bathroom floor, throwing up large amounts of blood. Rushed by ambulance to St. Anthony’s hospital in St. Petersburg, Florida, Jack continued to vomit blood and was immediately sent for transfusions and surgery. Doctors had a difficult time cauterizing burst blood vessels and Jack’s blood wouldn’t clot due to his alcohol-damaged liver. Never regaining consciousnesses after surgery, Jack died the next morning. He was 47.