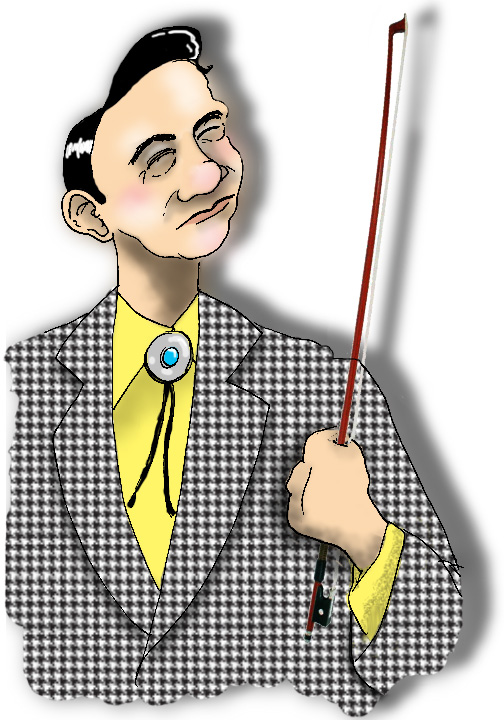 In the late 1940s, Spade Cooley had one of the highest rated TV shows in local Los Angeles television. With his infectious take on a blend of Western honky-tonk and danceable Big Band, the “King of Western Swing” was also the king of Saturday nights on KTLA in Los Angeles, attracting 75 percent of viewership to his live broadcast from the Santa Monica Ballroom. Guests on his show included top stars of the day, like Frank Sinatra and Dinah Shore. In addition to his band-leading, Spade appeared in 38 Western films alongside Roy Rogers. Spade Cooley was riding high and his ego increased at the same rate as his popularity.

As the rock and roll era approached, KTLA needed an excuse to ditch the now-heavy drinking Cooley. He was fired by the station. He managed a daily fifteen-minute show on rival station KTTV, but his popularity waned. He sought other avenues of revenue as he was desperate for income. He had married young Ella Mae Evans, the vocalist from his band and he had three children from a previous marriage. Spade pursued the idea of a themed Southern California water-park hoping to cash in on some of the popularity of Walt Disney’s recently opened park in Anaheim. He faced rejection after rejection as he pitched his idea to potential (and soon uninterested) financial backers. His increasing frustration, coupled with his increased alcohol intake, made Spade delusional. He was convinced that his wife Ella had a long-term affair with Roy Rogers and was still unfaithful.

On April 3, 1961, after another heated accusation of infidelity, and in the presence of his 14-year-old daughter Melody, Spade beat Ella to death, stomping repeatedly on her head as she lay on the floor pleading for her life. He then burned her stomach with a lit cigarette to make sure she was dead. As Melody fled the house in horror, Spade screamed that she was next. Four months later, a jury delivered a unanimous guilty verdict on first-degree murder charges. Spade was sentenced to life in prison.

After eight years, the state of California decided to grant Spade parole in early 1970. In November 1969, Spade received a 72-hour furlough to play benefit concert for the Sheriffs Association of Alameda County. His fiddle playing was inspired and his performance was greeted with a warm reception. Immediately after leaving the stage, Spade suffered a fatal heart attack and died backstage at the Oakland Auditorium. He was 58.