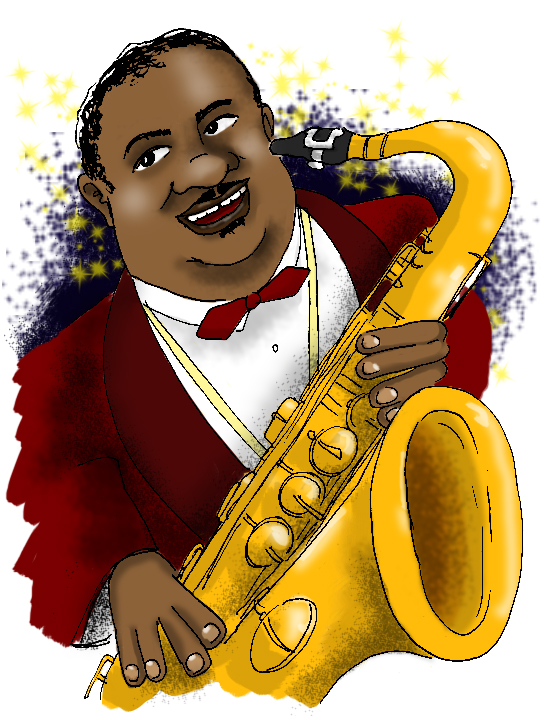 It was through his piano-playing stepsister that Leon “Chu” Berry was introduced to music at a young age. He stuck with it, playing alto saxophone through high school. He later switched to tenor sax after hearing jazz virtuoso Coleman Hawkins. (Although cited as an influence, Coleman Hawkins considered Chu an equal).

Chu began his professional career at the age of 21, playing with Sammy Stewart, the first of many swing bands. He moved on through several more swing bands, sticking around for two or so years each. He played with Fletcher Henderson before joining up with the great Cab Calloway in 1937. Along the way he gained popularity and respect as a sideman, backing up such musical luminaries as Bessie Smith, Billie Holiday and Lionel Hampton. The riff from Chu’s original composition “Christopher Columbus” made its way into Jimmy Mundy’s famous arrangement of “Sing Sing Sing” as performed by Benny Goodman.

In October 1941, Chu was travelling between gigs in Ohio and Toronto on a night that was thick with fog. Just outside of Conneaut, Ohio, with poor visibility, the car in which he was a passenger skidded and crashed at the end of a bridge. Chu suffered a skull fracture and other internal injuries. He was taken to a hospital where, due to the severity of his injuries, Chu passed away three days later. He was 33 years old. His funeral was attended by over a thousand mourners, among whom some of the greatest names in jazz and swing were represented.

The term “Chu Berry Sax” is used in reference to any saxophone made by the C.G. Conn Company from 1910 through the mid-1930s, including soprano, alto, baritone and C melody models  none of which Chu ever played. The moniker is misleading since there is no definitive style or model to which it refers.