This week’s Illustration Friday word is “round”. 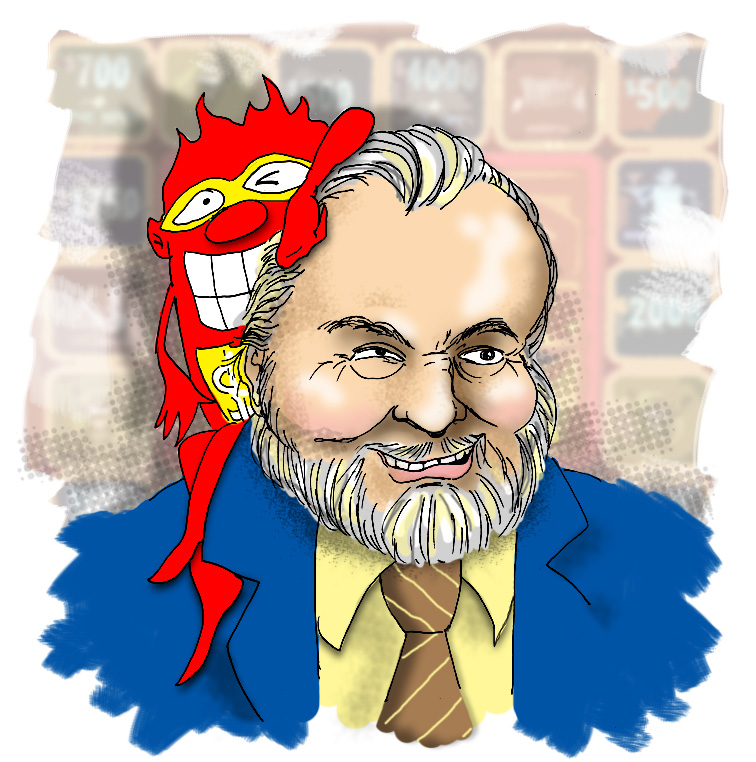 Michael Larson was flat broke, unemployed and had few possessions. He did, however, have a lot of time. And he used his time wisely. With no job, he began watching game shows to combat his boredom. One show, Press Your Luck,  piqued his interest.

Famous for its simple general knowledge questions, big money payoffs and the irrepressible Whammy character, Press Your Luck  was one of the more popular game shows. Contestants answered questions posed by host Peter Tomarken and were rewarded with spins on the “Big Board”. The “Big Board” was made up of 18 lighted squares, each briefly displaying a prize of dollar amount in five distinct flashing patterns. Interspersed among the prizes were Whammies, little cartoon devils whose job was to wipe out a player’s accumulated winnings. From the privacy of his home, Michael watched intently (and later videotaped) episodes of Press Your Luck.  He stared and focused on the patterns of flashing lights and prizes on the “Big Board”. Soon, he realized that two squares never showed a Whammy. He figured if he could memorize the patterns, he could surely gain an unbeatable edge and never hit a Whammy. Of course, he would have to be selected to appear on the show, but to Michael, that was a minor detail.

In May 1984, after weeks and weeks of intense preparation, Michael used the last of his savings to travel to Hollywood from his native Ohio for a tryout. Executive producer Bill Carruthers was happy to have Michael as a contestant despite contestant supervisor Bobby Edwards’ distrust and reservations.

In the first round of his appearance, Michael only accumulated three spins and compared to his competitor’s combined fourteen. He even hit a Whammy on one of his spins. The second round was a different story. Michael refocused, answered several questions and finished the second round with seven spins, more than he needed.

When his turn began, his demeanor from Round One changed drastically. He grew silent and stone faced. Ed Long, another contestant, called Michael’s state “trance-like”. Michael furrowed his brow and, with the precision and concentration of a surgeon, he stopped on a square illuminated with a high money amount and an award of an additional spin. He repeated this action over and over again. Over the course of a regulation game (that CBS broadcast over two days, due to the length of Michael’s turn), Michael racked up $110,237, the highest single-day win in game show history (to that date). He also passed the CBS “winnings cap” and was not permitted to return, although he was the reigning champion. CBS didn’t want to pay Michael, accusing him of cheating. The rules were scoured and a clause could not be found prohibiting memorization of the patterns of the board.

Michael divided his winnings, setting aside a portion for taxes, placing some in a bank account and investing the remainder in real estate. He later discovered that his real estate deal was an elaborate ponzi scheme and he lost his entire investment. Then, Michael heard about a contest being run by a local radio station. A random serial number from a one-dollar bill could be matched for a $30,000 payoff. Michael withdrew the remaining funds from his bank account in one-dollar bills. He would sit and carefully check the serial numbers of each bill, intending to re-deposit the bills if a match was not found. In December 1984, Michael and his wife attended a Christmas party. While they were out, their home was broken into and $40, 000 in bagged one-dollar bills were stolen. Michael accused his wife Teresa of having been involved and their already-fragile marriage ended.

In 1994, when the film Quiz Show  was released, interest in the Press Your Luck  scandal was reignited. Michael, recently diagnosed with throat cancer, appeared on Good Morning America  to discuss his brief infamy. A short time later, Michael became involved with a nationwide lottery fraud scheme and went into hiding. He passed away in central Florida in 1999 and it was only then did his family learn of his whereabouts.