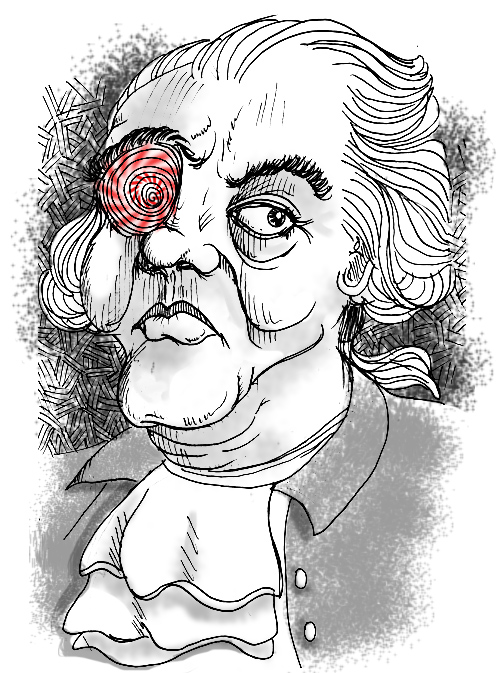 In his doctoral dissertation of 1766, De influxu planetarum in corpus humanum  [“The Influence of the Planets upon the Human Body”], physician Franz Mesmer theorized that a natural energy force exists and flows continuously over the body. He publicized his belief that this energy was influenced by the positions of the stars, planets and other natural occurrences. He conducted numerous tests on this “animal magnetism” (as he called it) using techniques of touching, intense staring, waving magnetic wands and even the high-pitched tones of the glass armonica.

Mesmer left Vienna in 1777 after his claim to bring a cure for blindness failed on an 18-year old patient. He moved to Paris where he continued to proliferate his theories. In 1784, King Louis XVI organized a committee to investigate Mesmer’s practices and claims. The group of four prominent and honorable commissioners from the Royal Academy of Sciences included:

After careful consideration and investigation, the committee ultimately determined Mesmer to be full of shit. He was driven into exile and died in shame in obscurity in 1815.

And he outlived every member of the committee*.


* It is interesting to note that two of the four commissioners of the investigating committee, Antoine Lavoisier and Jean Sylvain Bailly, died on the guillotine during the Reign of Terror after the onset of the French Revolution. Although Dr. Joseph-Ignace Guillotin advocated the use of the mechanized decapitation device, he did not die on it. Another physician with a similar name, Dr. J.M.V. Guillotin from Lyon, France, was executed on the guillotine. Dr. Joseph-Ignace Guillotin, who despised and shunned his association with the execution apparatus, died of natural causes in 1814.

Based on stories about the many, many illegitimate children he fathered, Benjamin Franklin obviously died from exhaustion in 1790.