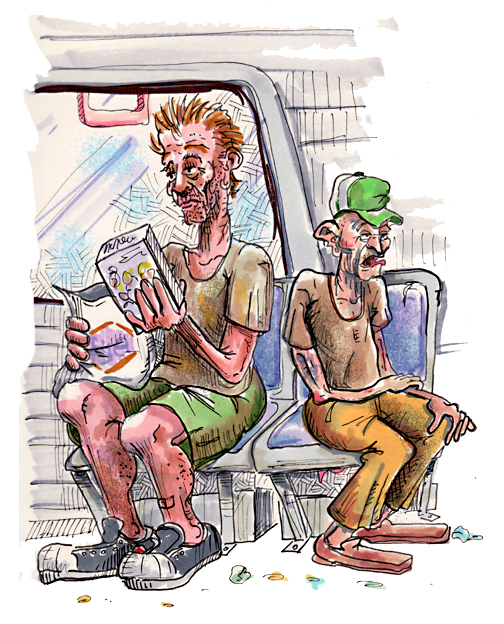 On Saturday, I went to meet my son at a free concert at the Great Plaza on the Delaware River’s waterfront. Instead of driving and fighting for a parking space on a busy holiday weekend, I took the train into downtown Philadelphia. I disembarked at the Market East station and headed toward to 11th Street stop of the Market-Frankford subway. I passed through the turnstiles and waited on the platform for the next subway train to arrive. The station slowly welcomed more passengers  an interesting array of humanity, the majority of which I would, most likely, never ever see again for as long as I live. One man paced the tile floor  the full length of the station  several times with his head down and a determined gait. He muttered unintelligibly under his breath  the only word I could understand was “fuck” and each utterance rang out clear as a bell. He also looked straight at me on several passes of his confined journey. Two women in their twenties argued loudly and bitterly about “taking my fucking money, you bitch”,  but I didn’t hear the outcome, as they moved to the very end of the platform and their disagreement became muffled echoes. Finally, the train clattered along the tracks and hissed to a halt in the station. The doors whooshed open and, after a number of riders exited, I boarded with the other commuters.

The train rattled and shook until it rested briefly at 8th Street, its next scheduled stop. The doors opened and two men entered and sat down in a nearby double seat. One man was obviously older, and by the looks of his leathery, wind-burned skin, I’d say by about two hundred years. He was a husk of a human and it was as though his entire, intact skeleton had been extracted. He was bent over like a palm tree in a hurricane and a dirty T-shirt hung loosely from his withered upper torso. His pants were just as ill-fitting and rivaled his shirt in the cleanliest department. He did not wear a green and mesh Notre Dame baseball cap, so much as it was perched on the dome of his cranium. He sat and stared at a spot several inches in front of his crooked nose and his toothless mouth drooped agape at the base of his head.

The old-timer’s traveling companion was destined to evolve into a similar state as the old man in a few years time. His skin  or more precisely, his hide  had the appearance of scabby beef jerky. It was deeply wrinkled and looked like it belonged on a man twice his age. His hair, although close-cropped, was matted and unkempt and undoubtedly filthy. Upon first glance, his shirt displayed a pattern, but closer inspection merely revealed it to be an accumulation of stains. His shorts were threadbare and equally as grubby. His sinewy legs ended at a pair of lace-less sneakers. He fumbled with a bag from FYE (a nationwide chain of entertainment media stores, specializing in CDs and DVDs) and withdrew the last possible thing anyone would ever have imagined.

A DVD box set of a complete season of Little House on the Prairie.

The old man continued his blank stare into space, as the younger man methodically unwrapped the DVD. He removed the outer cardboard slipcase and carefully placed it in the bag. He opened the plastic box that housed and protected the DVDs. He examined the top disk, admiring the likeness of Michael Landon emblazoned on its surface and lifted the small descriptive booklet that accompanied the set from beneath the two clips that held it in place. He snapped the box shut and, as if he was about to study some fantastic literary tome, began to read the booklet from page one.

As I stared incredulously at this mysterious pair, a stream of questions poured into my head, including, but not limited to: “Where do these guys live?”, “Where do these guys work?”, “What did they wear on their job interview and how did they pass the interview process?”, “Which season of Little House on the Prairie  did he buy? The one where Mary went blind? The one where Almanzo has a stroke?”, “Which season did he love so much that he must own?… or perhaps he just heard about the show and this is his introduction.”, “Where will he watch the DVDs? At home? Does he have  a home? Does this guy, who can’t even keep his clothes clean, even own  a DVD player? … and, if so, what the hell kind of priorities does he have?”

The subway stopped at my destination. My questions remained unanswered. The mystery remained a mystery.