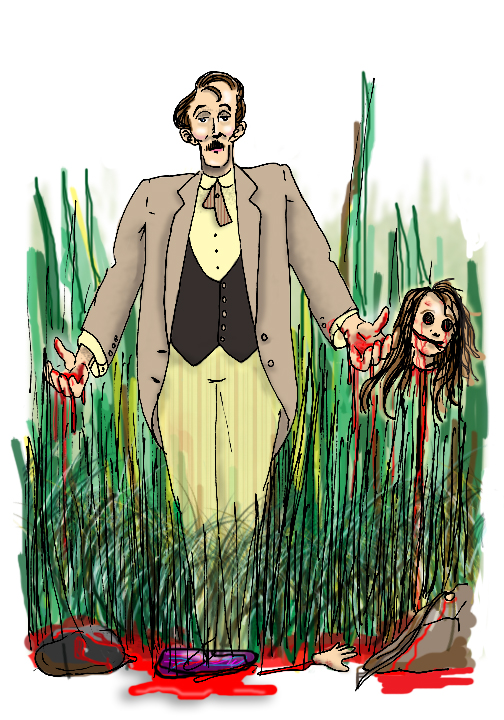 On a bright August afternoon in 1867, eight-year old Fanny Adams, along with her little sister Lizzie and her friend Minnie Warner, went to play near Flood Meadow, just up Tan House Lane from her home in southeast England.

While the girls played, they were approached by Frederick Baker, a 29-year old, well-dressed solicitor’s clerk. Baker offered Minnie and Lizzie three halfpence to run off and buy candy. He offered Fanny one halfpence to accompany him up the road to the village of Shalden. Fanny took the coin, but refused to leave. Baker picked Fanny up and carried her into a nearby field and out of the sight of her playmates. Unfazed, Lizzie and Minnie played for several more hours until they decided to head home.

Fanny’s mother questioned the girls as to Fanny’s whereabouts. The girls told her of the man and the monetary offerings. A panicked Mrs. Adams and a neighbor ran up Tan House Lane and were met by Frederick Baker, calmly strolling towards them. They asked him about Fanny. He told them he had given the girls money for sweets, as he often does, but that was all. He said the three girls left together. Impressed by his calm demeanor, his fine clothes and his air of respectability, the women let him go.

As evening fell and Fanny had still not returned home, more of the Adams’ neighbors formed a search party and scoured a wider area. Around 7 PM, they discovered Fanny’s horribly butchered remains strewn across the field at the end of Tan House Lane. Her severed head, eyes removed, was perched atop a pole. Her torso had been cut open and her internal organs were tossed in all directions. Her arms and legs had also been dismembered and lay in several locations throughout the field. Mrs. Adams ran to where her husband and some colleagues were playing cricket. Upon hearing the full report from his wife, Mr. Adams went home to get a shotgun and hunt for Frederick Baker, but neighbors talked him out of it.

Later in the evening, police arrested Frederick Baker at the office of his employer, respected solicitor William Clement. Baker’s clothes had several unexplained blood stains on them. A search of his desk yielded two blood-stained knives as well as a personal journal with the August 24 entry: “Killed a young girl. It was fine and hot”. When police questioned him as to why his pants and shoes were wet. He said he liked to walk through water and followed that with a sarcastic “I won’t hang for that,  will I?”

At an inquest (sort of a grand jury), Baker maintained his innocence, despite the testimony of several witnesses and a coroner’s report identifying a rock from the field as the murder weapon and the two knives as the instruments of dismemberment. At the close of the trial, the jury took fifteen minutes to return with a guilty verdict. Frederick Baker was hanged on Christmas Eve 1867,  before a crowd of 5,000.

An elaborate headstone for Fanny Adams’ grave was purchased from public donations.

(In 1869, the Royal Navy began issuing tins of mutton stew as meal rations to sailors. The tasteless meals were likened to the remains of Fanny Adams. “Sweet Fanny Adams” became slang for anything worthless and was eventually shortened to “Sweet F. A.”)