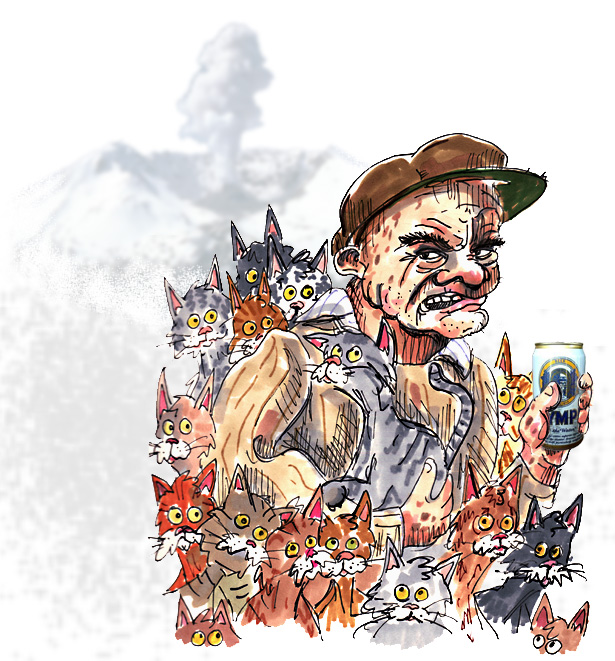 After his 1917 discharge from military service, West Virginia-born Harry R. Truman moved to Riffe, Washington. In 1926, he became the caretaker of a lodge on the shore of Spirit Lake. The lodge was a popular spot for hunters and fishing enthusiasts looking for rustic accommodations in a remote wooded area. Harry was a cantankerous character who took in feral cats and had an affinity for alcohol. He operated the lodge for 52 years.

In the late months of 1979, authorities issued warnings based on possible volcanic activity. Harry’s lodge was at the base of Mt. Saint Helens and he was told of the possibility of evacuation in early 1980. Stubborn Harry said that the findings and predictions were over-exaggerated and that he had no intention of leaving his dwelling. The authorities continued to issue words of caution and Harry and his cats continued to stay put. Harry maintained that, after years of side-by-side existence, he and the mountain had a mutual respect, saying “Spirit Lake is in between me and the mountain, and the mountain is a mile away, the mountain ain’t gonna hurt me”. Harry ignored the warnings and stood his ground.

Just as predicted, on May 18, 1980, Mt. Saint Helens erupted, spewing a mixture of superheated gas and rock sixteen miles into the air and into a surrounding area of 230 square miles. Buildings and vegetation were destroyed. Volcanic ash and debris  one hundred and fifty feet deep  engulfed Spirit Lake.

Harry, his cats and his lodge were, no doubt, buried, too.