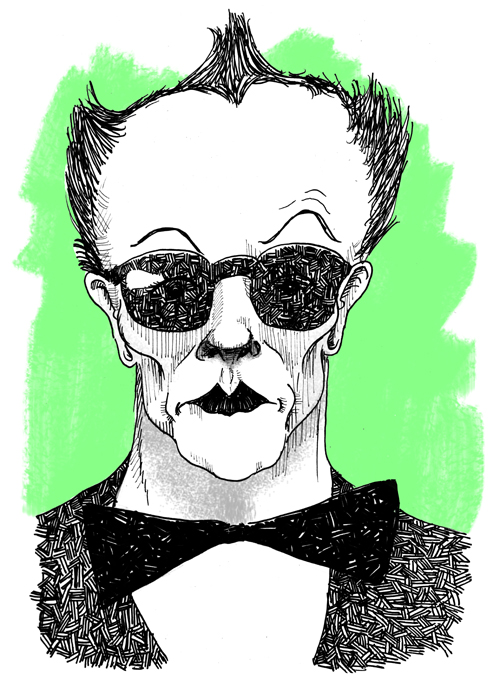 He would have you believe that he landed on this planet from some far off galaxy, but in reality, Klaus Nomi was born in Germany (on planet Earth) in 1944.

In his youth, he worked as an usher at the Deutsche Oper in West Berlin where he’d entertain the other ushers and the maintenance staff by singing opera after the shows. He also sang in small clubs in Germany until he moved to New York City in 1972. He began performing in the arty East Village clubs showcasing an eclectic blend of operatic arias and pop classics from the 1960s. His shows featured strobe lights and smoke bombs and unusual costumes and was a word-of-mouth sensation. Klaus soon teamed with Joey Arias, a Fiorucci  live model and drag queen turned singer/performance artist. Klaus appeared with Arias and his band Strange Party at various night clubs in New York City. Their otherworldly shows caught the attention of David Bowie and he asked the pair to accompany him on his upcoming guest appearance on Saturday Night Live.  Klaus sang back-up with Bowie on “TVC15”, “Boys Keep Swinging” and “The Man Who Sold the World” on the show in 1979. Bowie wore an over-sized plastic tuxedo for his set and Klaus was taken by it. He commissioned one to be made for himself and it soon became his iconic trademark. Klaus released four albums and a slew of singles ranging from opera to show tunes to covers of early rock and roll classics. As his career progressed, he concentrated primarily on opera and displayed an incredibly wide vocal range.

In the late 1970s, Klaus’ health began to deteriorate and he eventually succumbed to the then-relatively unknown disease AIDS in 1983. He was 39.

In the nearly 30 years since his death, Klaus’ cult following has increased. A documentary of his life, The Nomi Song, was released in 2004. Several designers have used his unusual fashion as an inspiration for their lines. Many artists have recorded cover versions of his songs. A cartoon version of Klaus even popped up on The Venture Brothers in 2006.