This week’s Monday Artday challenge word is “villain”.  Here is the first of two illustrations for this suggestion. (Here is the second.) 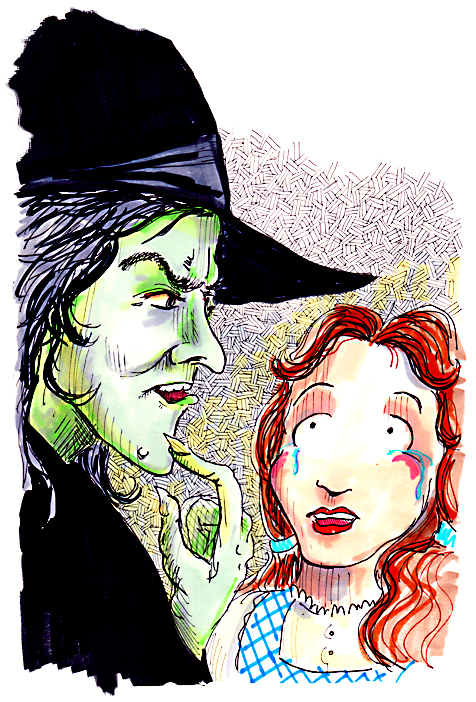 She spent her entire screen time in “The Wizard of Oz” tormenting Dorothy Gale. Whether it was in her role as Miss Almira Gulch, the wealthy but crotchety landowner who takes Dorothy’s beloved Toto away under court order or as the main roadblock in Oz keeping Dorothy from returning to Kansas, The Wicked Witch of the West was as evil as they come. (Okay, so Dorothy killed her sister with a house, but she was a witch, after all.) The Wicked Witch was eventually served her just desserts when a slow reaction to a hurled bucket of water brought her to a bubbling and steamy demise. (Of course, Dorothy met her own fate forty years later.)

Margaret Hamilton, who portrayed the Witch, was in reality a former kindergarten teacher who loved children. (Two of her students during her teaching days were future actors Jim Backus and William Windom.) After her iconic, career-defining role in “The Wizard of Oz”, Margaret often visited schools as part of her advocacy for public education. She loved the childrens’ reaction when she told them that she played the witch and was often coaxed into performing the famous cackle to squeals of delight.

A veteran of over 100 movies, television productions and a turn as “Cora” in a popular series of Maxwell House coffee commercials, Margaret passed away at age 82 in 1985.