The new illustration challenge on the Monday Artday website is “strange food”. 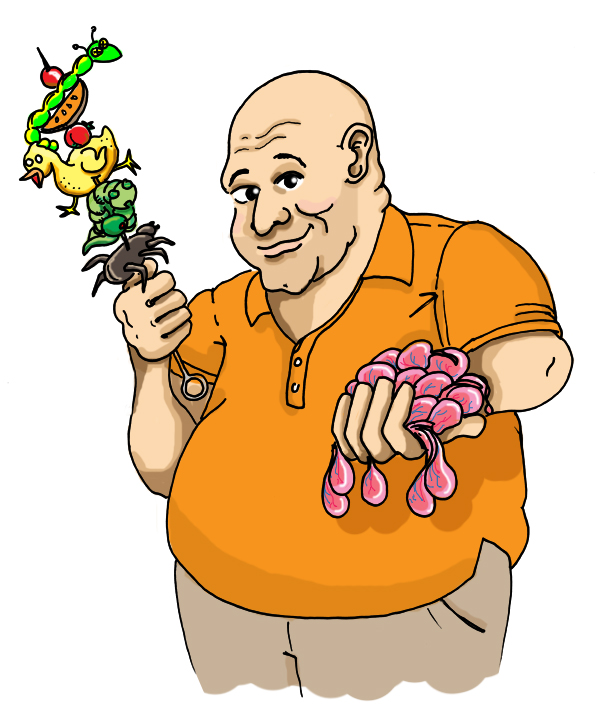 To break up the monotony between shots of sun-tanned tourists on cruise ships and Anthony Bourdain’s smoke-filled excursions to out-of-the-way gourmet eateries, the Travel Channel debuted Bizarre Foods with Andrew Zimmern  in 2007. Andrew is a chef, a food critic and, most important, a daring gourmand. He’s a likable and entertaining guy and, for a time, I enjoyed watching the show.

The premise of the show is simple. Andrew travels to a specific country, meets some locals, gets them to cook up a batch of native specialties and Andrew eats ’em  no questions asked. And let me tell you, Andrew has eaten some pretty weird shit in the show’s five seasons. In early episodes of the show, Andrew happily scarfed down balut  (a fertilized duck egg with a duck embryo inside), a still-beating frog’s heart, fermented whale blubber, lamb’s tongue and eye, assorted insects and various internal and external parts of chickens that are usually dropped down a garbage disposal. As the seasons rolled on, a pattern seemed to develop. I became very aware of Andrew’s affinity for the reproductive organs of masculine members of the edible animal kingdom. It was very obvious that Andrew loved a good pair of cojones  at chow-time. On outings to local marketplaces, Andrew always questioned butchers about the availability of Rocky Mountain oysters  or, as they were called in the episode filmed in Spain – criadillas. Extended segments of subsequent shows featured a smiling and anxious Andrew stuffing bollocks  into his maw like movie popcorn. Happy waitresses or humble farmers would present platters overflowing with steamed and deep-fried delicacies  like calf’s brains or jellied moose nose  but Andrew, although grateful, would eye the kitchen, hopeful for a big bowl of balls. Soon, Bizarre Foods got boring.