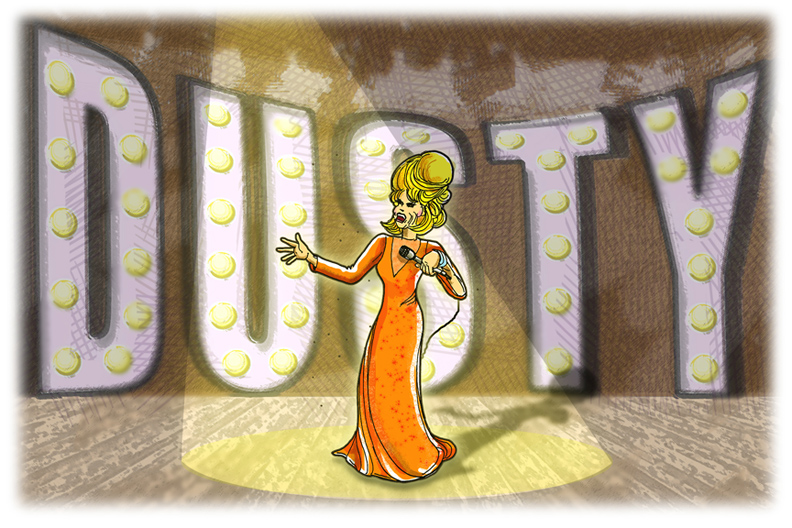 Mary Isobel Catherine Bernadette O’Brien performed with her brother and a friend as a singing trio. They first practiced in a field in springtime, so they settled on the name “The Springfields” for their group. Ever the tomboy, Mary earned the nickname “Dusty” from her rough style of playing football with the boys. After moderate success as part of the group, young Mary broke out on her own using the name Dusty Springfield.

She was the first public figure to introduce American soul music to England. Her affinity for evening gowns and unique style of make-up caused a sensation with young women in the 1960s. They copied her so-called “panda eye” mascara, a look that rivaled the “Beatle haircut” among their male counterparts.

Because of her love and respect of American pop music, she implored her studio musicians to imitate the sound heard on Motown soul recordings. She was a perfectionist in the studio and produced many of her own recordings without taking official credit. After making a huge name for herself as part of the British Invasion, Dusty switched gears and recorded a more “rootsy”-oriented album. The result was the acclaimed ground-breaking 1969 release Dusty in Memphis.  It was nominated for a Grammy and inducted into the Grammy Hall of Fame. In 1987, she recorded a duet with new wave popsters Pet Shop Boys. In 1994, director Quentin Tarantino featured her recording of “Son of a Preacher Man” in his film Pulp Fiction.  Renewed interest in Dusty’s music surged.

Dusty was diagnosed and battled breast cancer for five years until her death in 1999. She passed away on the day she was scheduled to go to Buckingham Palace to receive her award of Officer, Order of the British Empire.

When Dusty was posthumously inducted into the Rock and Roll Hall of fame in 1999, her friend, singer Elton John, said, “I think she is the greatest white singer that there ever has been.”