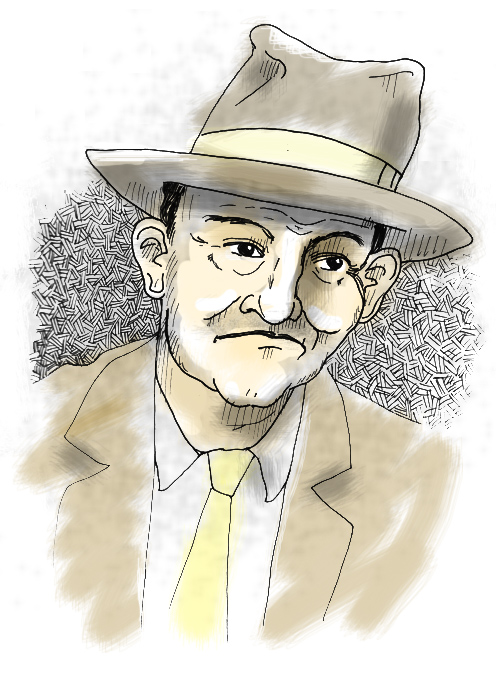 In the early 1920s, young Lee Nash developed a comedy vaudeville act and was soon joined by his childhood friend Morris Horowitz. Lee, now known by the stage name “Ted Healy”, told jokes onstage and was heckled by Morris, who was planted in the audience. Morris would then come up to the stage and engage Ted in funny banter, until the act culminated in the payoff of Ted losing his trousers  a punchline given approval by the audience’s hysterics. Morris’ brother Samuel joined the act as another heckler, followed by friend, violinist Louis Feinberg. The act, Ted Healy and His Southern Gentlemen, was very popular on the vaudeville circuit for years.

The troupe made a film, Soup to Nuts, in 1930 and the Horowitz brothers, along with Feinberg, split from Ted over a movie contract dispute. Morris shortened his name to Moe. Brother Samuel used his nickname “Shemp” as a stage name. They also changed their surname to Howard. Louis Feinberg adopted the professional name “Larry Fine” and left the violin behind in favor of pratfalls, eye pokes and hair-pulling. The three believed they were “the draw” of the act and they embarked on a career as a trio  The Three Stooges.

After officially, but amiably, parting ways with the Stooges in 1934, Ted entered a new phase of his career, choosing adventure and mystery films over comedies. He appeared in over thirty movies for 20th Century Fox, Warner Brothers and MGM. He was so popular that his was the first caricature to be placed on the wall at famed Manhattan restaurant Sardi’s.

On December 19, 1937, Ted visited Moe and Helen Howard to tell them that his wife Betty was expecting a baby and was going to deliver shortly. Ted had always loved children. He doted over Moe’s kids and gave generously to underprivledged youngsters at holiday time. He was ecstatic at the thought of becoming a father himself.

On December 21, 1937, Ted was drinking in a bar on Sunset Strip in Hollywood when he got into an argument with a young college student half his age and twice his size. Two of the student’s friends joined in when the name-calling escalated to shoving and spilled out into the parking lot. The three young men beat the crap out of Ted. A friend picked Ted off the sidewalk and took him to his apartment where he later died as a result of his injuries.

However, there is another account of Ted’s death that differs greatly from that story. Allegedly, MGM boss Louis B. Mayer sent hefty actor Wallace Beery and Albert Broccoli (later producer of the James Bond film series) to beat up Ted. The “college boys” story was fabricated and given to the press as Beery laid low in Europe for several months. This scenario is unsubstantiated and dismissed as  a total lie by members of Mr. Mayer’s family. Despite the mystery surrounding the conflicting stories, the fact was that Ted Healy died at age 41.

Never one to save money, Ted died penniless and his funeral was paid for by fellow vaudevillians the Foy Family. One week after Ted’s funeral, his son was baptized.