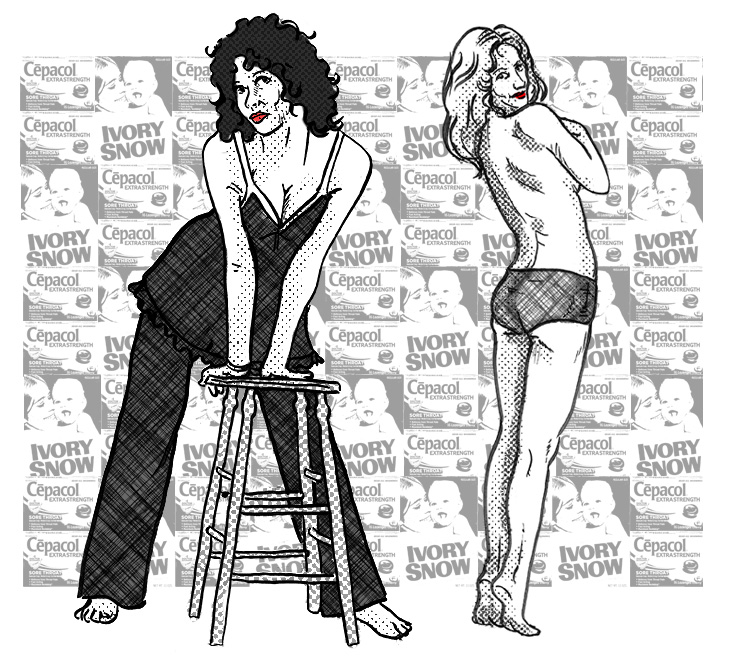 Because of her straight-laced upbringing, Linda Boreman earned herself the nickname “Miss Holy Holy” at her strict Catholic high school. Later, in the “free love” times of the 1960s, Linda gave birth to a son. Her mother insisted the boy be given up for adoption to spare humiliation and preserve the family’s good name. Soon after that, Linda was involved in a car crash that almost claimed her life. It would be the cause of a lifetime of health problems.

While recuperating from the accident at her parents’ home in Florida, Linda became involved with Chuck Traynor, a controlling and manipulative sleazebag twelve years her senior. Traynor threatened and beat the impressionable Linda into having sex with strangers and performing in pornographic “loop reels” for his own financial gain and pleasure. Using a loaded M-16 rifle aimed at her head as persuasion, Traynor forced Linda to make the infamous pornographic short film Dog Fucker  in 1971. In 1972, on a budget of around $22,500, Traynor (acting as production manager) and his rifle, “insisted” that Linda, using the name “Linda Lovelace,” participate in Deep Throat. The film was shot over a period of six days in a hotel in Miami, Florida. During the filming, Linda was subjected to regular beatings at the hands of Traynor. Bruises are noticeable on Linda’s legs in various scenes of Deep Throat.

Upon its release, Deep Throat  surprisingly acquired a mainstream audience and became a huge hit among the art film world, with supporters like Jack Nicholson, Johnny Carson and Barbara Walters. Linda was paid $1200 for her work, all of which Traynor took. In 1974, Linda left Traynor and became a fervent anti-pornography advocate. She claimed that she had not consented to any sex act depicted in the film and did so under threats from Traynor.

Linda contracted hepatitis from a blood transfusion after her car accident and received a liver transplant in 1987. In April 2002, Linda was involved in another car accident in which she sustained massive head trauma. After nineteen days in a coma, Linda was taken off life support and died at age 53.

Marilyn Ann Briggs aspired to be a model. At 16, she often forged her mother’s signature to get out of school to attend auditions. She was given several modeling jobs and even got a small role in the Barbra Streisand film, The Owl and The Pussycat, using the name Evelyn Lang. Biding her time as a Los Angeles topless dancer, Marilyn’s big break came when she landed a modeling job as a young mother fawning over her baby on the box of Procter & Gamble’s Ivory Snow detergent. Filled with confidence, she answered an ad for a casting call and but expressed disinterest when she discovered it was for a pornographic film. The film’s producers, the notorious adult film pioneers The Mitchell Brothers, noted her resemblance to popular actress Cybill Shepherd. Flattered, she told the Mitchells that she was “The Ivory Snow Girl” and they flipped, realizing the marketing potential. They told her that the film they had in mind for her would “sell a hell of a lot of soap for Procter & Gamble.” She negotiated the terms of her own contract to appear in the film — $25,000 salary, plus a percentage of the profits. When the low-budget film, 1972’s Behind the Green Door, ended up earning fifty million dollars, it proved to be a shrewd forethought for 19 year-old Marilyn. Of course, Procter & Gamble dropped her as their product representative, although the famous Ivory Snow box subtly appeared in nearly every one of Marilyn’s films.

Behind the Green Door was a ground-breaking achievement in the world of X-rated films. It was the first feature-length pornographic film to feature an interracial couple. It caused a huge uproar, even among the adult film industry. Additionally, it made Marilyn Chambers (the former Marilyn Ann Briggs) a star, even though she spoke no lines of dialogue. She went on to star in thirty more films over the next four decades, sometimes crossing over into non-adult, mainstream movies working with directors such as horror wiz David Cronenberg. Not fully satisfied with her career in acting, the ever-ambitious Marilyn pursued a brief venture into singing, recording a disco hit in 1976, and later entered the political arena by running for vice-president in 2004 on the Personal Choice Party ticket, supporting presidential candidate Charles Jay.

Marilyn was married three times, including eleven years to Svengali-like Chuck Traynor, who served as her manager until their divorce in 1985.

On April 12, 2009, Marilyn’s daughter, 17 year-old McKenna, came home to find her mother dead. She had succumbed to a cerebral hemorrhage and aneurysm at the age of 56.