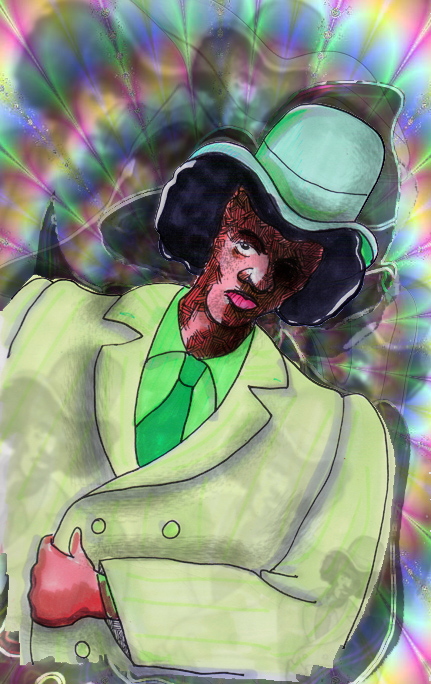 Eighteen-year old Meredith Hunter, known to his friends as “Murdock”, picked up his girlfriend Patty Bredahoff early on December 6, 1969. Meredith, a flashy dresser with a large Afro, was decked out in a lime green suit and matching derby hat. His destination was an all-day concert at Altamont Speedway featuring some of the top performers of the day  Santana, Jefferson Airplane, The Flying Burrito Brothers, Crosby, Stills, Nash & Young  and culminating with the legendary Rolling Stones. The concert was his destination, but his destiny was very different.

The Stones had hired infamous Southern California motorcycle club Hell’s Angels for security at the concert. As part of their payment, the Angels were provided with $500 worth of beer. The burly Angels created a human barrier between the performers on the unusually low stage and the increasingly unruly crowd. As the day progressed and as the audience and security crew became more intoxicated, the situation grew violent  so violent in fact, that The Grateful Dead refused to take the stage moments before their scheduled performance time.

The Angels were drunk. The crowd was stoned on amphetamines and LSD. Sporadic fights erupted throughout the confluence . Projectiles flew towards the stage. The Hell’s Angels retaliated by swinging pool cues and motorcycle chains and hurling full cans of beer at the crowd. In the early evening, The Rolling Stones took the stage, led by a visibly shaken Mick Jagger. Jagger pleaded with the crowd to “Just be cool down in the front there, don’t push around.” The Stones began their set. During their third song  “Under My Thumb”  Meredith Hunter made the decision to climb on stage. He met the full resistance of Hell’s Angels. One of the Angels punched Meredith in the head. He fell and disappeared in to the swelling crowd. Seconds later, Meredith resurfaced with a murderous and vengeful look in his eye. And, this time he was pointing the long barrel of a silver handgun at the stage. As Meredith pulled the trigger, Hells Angel Alan Passaro knocked the gun from his hand. Then, Passaro thrust a knife into Meredith’s back. Passaro stabbed Meredith several more times as other Angels stomped and kicked the eighteen-year old while he lay on the ground.

Passaro was arrested and charged with Meredith’s murder, but was acquitted on the grounds of self-defense after the jury viewed the footage from the concert showing Meredith drawing the revolver and pointing it toward the stage. An autopsy revealed that Meredith had been heavily intoxicated on methamphetamine.

Shortly after the incident, Meredith’s mother requested that Altamont Speedway be turned into a public park to “prevent any more wrongful deaths”. Alameda County officials allowed the Altamont to still host races, but barred any future concerts. She also sued the Rolling Stones for wrongful death and made an out-of-court settlement for $10,000.

In 1985, Alan Passaro was found dead, floating in Santa Clara County’s Anderson Reservoir with $10,000 in his pocket. No one was ever charged with his murder.