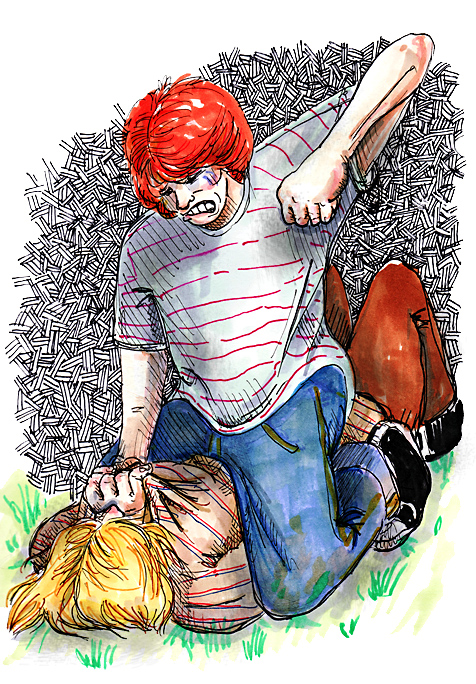 “When you’re a kid, you can be friends with anybody. Remember when you were a little kid what were the qualifications? If someone’s in front of my house NOW, That’s my friend, they’re my friend. That’s it. Are you a grown up.? No. Great! Come on in. Jump up and down on my bed. And if you have anything in common at all ─ You like cherry soda? I like cherry soda! We’ll be best friends!”

Growing up, there were a couple of kids on my block that I’d call “friend.” One, in particular, was Donnie Columns. My relationship with Donnie ran the spectrum from close buddy to mortal enemy. Donnie lived three houses away from me on Nestling Road in Northeast Philadelphia. Donnie and I grew up together ─ playing with our Matchbox cars, reading comic books, riding our bikes ─ all the things that adolescent friends did. Sometimes Donnie would steal my Matchbox cars and my comic books and take off with my bike, but I usually overlooked those things because he was my friend. Donnie once stole my entire collection of Partridge Family trading cards and I never even mentioned it to him. Friends just don’t bring stuff like that up.

Every so often, Donnie would turn on me. I think he thought it was funny. We would be happily playing in his backyard or on a neighbor’s front lawn when he would suddenly unleash a spewing fountain of anti-Semitic slurs in my direction. In hindsight, I’m sure he was merely parroting what he had heard his parents say behind closed doors. After all, my family was one of a handful of Jewish families in a predominantly gentile neighborhood and only one of two on the block. Donnie’s father always reminded me of Art Carney, if Mr. Carney was a Klansman. I always got an uneasy feeling from Mr. Columns around the Christmas/Chanukah season, as though the pathetic electrified menorah in our front window posed some sort of threat to him. I’m sure neither Donnie nor I fully understood the true implications of his insults, but we understood their basic purpose. Donnie wanted to start a fight.

Infrequent as they were, my neighborhood did play host to a number of fights. I was involved in a few fights as a kid, though I can’t, for the life of me, remember what initiated them. It was a rite of passage of sorts, but not one I needed to experience on a regular basis. I know I never started a fight (except maybe with my brother, an ill-conceived endeavor as he bested me in all the important fight categories ─ bigger, older, stronger and more athletic). I did run from a few fights, avoiding my predator for as long as it took to be forgotten. I fought with Johnnie Hacker, a little anti-Semitic prick from up the street. He would taunt me from afar, yelling “Jew” and “Kike” at me from the sanctuary of his fenced-in backyard. In winter, he would fire snowballs at me as I made my way home from school. I did my best to avoid him, but one time we went at it and I never let his taunts bother me after that. I even fought with a girl on my block once.

But most of my fighting was with Donnie Columns. Donnie fucking Columns. It seemed that Donnie didn’t need a reason as specific and meaningful as my ancestors standing idly by while his savior was crucified. One time, I was in Donnie’s house and I saw a triptych photo frame displaying images of his two younger sisters dressed in tutus and frozen in ballet poses. In the center frame was a smiling Donnie in a sequined vest, posed in a similar fashion. I was staring at the photo in disbelief for too long until Donnie decided I had seen enough. He took me outside and beat the shit out of me. He was bigger than me. He was stronger than me. He was most likely beaten by his parents, so he had the fighting moves. When I fought with Donnie, he would always beat the shit out of me. One time he sneaked his brother’s off-limits BB gun out to his backyard to show me how cool he was. He squeezed shot after shot out of that gun, the BBs bouncing off tree trunks and empty tin cans that littered his yard. Bored with his static targets, he turned toward me, raised the gun at arms length and in a low voice through clenched teeth whispered, “I’ll give you three to run. Horrified, I turned and fled like a frightened rabbit ─ Donnie’s low snickers echoing behind me. He pulled the trigger attempting to fire one over my head. Instead, the errant BB ricocheted off his overhanging roof and found the dead center of the back of my head. I stumbled and fell on the grass. Afraid that he just killed me, Donnie ran over to check on my well-being. I rolled over on my back, crying from the pain. Donnie’s face revealed a look of relief ─ relief that he had not just committed murder. I managed to get to my feet and I ran home. I told my mother what had transpired and, after tending to my wound, she telephoned Donnie’s mother so no one would be left out of the fun. Donnie’s mother resembled Batman-era Julie Newmar and there was something weird and other-worldly about her. She listened to my mother’s second-hand account of the incident. I have no doubt that Donnie felt her wrath when she hung up the phone. I know this because several days later, totally unprovoked, Donnie beat the shit out of me again.

Donnie beat me up regularly from the late 1960s into the early part of the 1970s. They weren’t horrible or bloody beatings. A crowd of kids from the block, whooping and yelling, would encircle the two of us as we rolled around on the grass. A few minutes would pass and, after a series of blows to my torso, the fight would end with me crying and humiliated and Donnie triumphant. Sometimes, my mother or father would come out of the house and break it up, while Mr. Columns stood off in the distance, smoking a filter-less Camel, calling out “Ahh, they’re just kids!” and chuckling.

One day, enough was enough. I don’t remember what it was that triggered me, but Payback Day had arrived and it arrived expecting a lifetime of compounded-daily interest. I have a clear, indelible picture in my mind of that day. I knocked Donnie flat on his back. I got on top of him, my knees assuring that his arms remained immobile. With my adrenal glands pumping, my unrelenting fists unleashed the fury of countless shellackings as I walloped the motherfucking piss out of Donnie Columns. The fight ended when Donnie’s mortified father pulled me off of his son and berated my parents who were watching from our kitchen window.

Although Donnie and I were the same age and went to the same elementary school, we never had any classes together. Donnie was always in the remedial classes because he was an idiot. When it came time for high school, I vaguely remember some hushed gossip about problems in the Columns household and Donnie either dropped out or moved away with one of his parents.

I would imagine that as life continued for Donnie, he persisted in his fighting ways and eventually met someone who wasn’t as forgiving a friend as I was.