The current challenge on the Monday Artday illustration website is “castaway”. 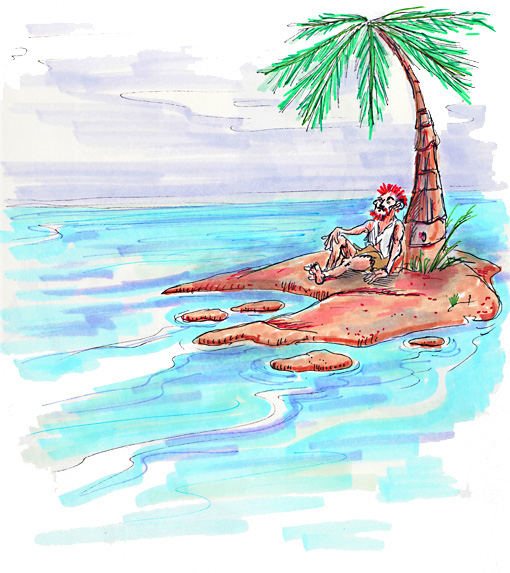 Earlier this week, Corey Haim, another former child actor with a hard-luck story, passed away at a young age. Corey was just another in a long line of former child actors following an unfortunate path  Dana Plato at 35, Brad Renfro at 25, Brittany Murphy at 32, River Phoenix at 23. But there is one former child star that this ultimate fate consistently eludes  Dante Daniel Bonaduce. And it certainly is not for lack or trying, because Danny Bonaduce has tried his darnedest.

For four seasons, Danny Bonaduce was on a television sitcom called The Partridge Family.The show told the far-fetched story of a typical Southern California family that also happened to be a rock group. Danny played second banana  no, make that third banana to the series stars Oscar winner Shirley Jones and heartthrob David Cassidy. Danny played obnoxious little brother/bass player Danny. As it turns out, Danny was acting when he played bass, but wasn’t acting when he played obnoxious. When the series ended, Danny attempted to continue his acting career, but one thing stood in his way, he didn’t have and ounce of talent. Nope, not a drop. He made a handful of low-budget movie and TV appearances, mostly playing himself with some Partridge Family  reference as the punchline to a joke. Yep, Danny managed to milk his (almost) four year stint on a novelty TV show that aired forty years ago into a career.

So, when a story pops up in the news about a tragedy involving a former child star, Danny is front and center, spewing stories of his own troubled youth. I have heard Danny’s nicotine-ravaged voice relating these anecdotes so many times, on so many news and entertainment outlets, I could tell them as my own. In every analytic discussion of the actors named earlier and others, Danny always manages to push his way into the spotlight. A proud accomplishment for an inarticulate, hot-headed, violent, former drug addict with no talent, who has served time in jail. He was one of three “experts” interviewed on NBC’s Today Show  the morning after Corey Haim’s death. I said to my wife, “How long until he says the words ‘Partridge Family’ ?” She answered, “Only if it preceded by ‘When I was on the’“.

Danny’s latest gig is morning drive-time DJ on Philadelphia radio station WYSP. I live in Philadelphia, and while I don’t listen to him or his station, Danny has traveled to Philadelphia Phillies spring training camp in Clearwater, Florida on behalf of WYSP. Because I follow the Phillies, I have seen Danny during several reports on preseason baseball activity, to my dismay.

I hate Danny Bonaduce. I’m sick of seeing his craggy features splashed across my television. I am sick of hearing his raspy croak telling the same story for the past forty years. I would like Danny to become stranded on a uncharted island, free from TV cameras, radio microphones and all forms of media exposure.

I really hate Danny Bonaduce and I long for the day I never see him again.