The current challenge on the Monday Artday illustration website is “circus”. 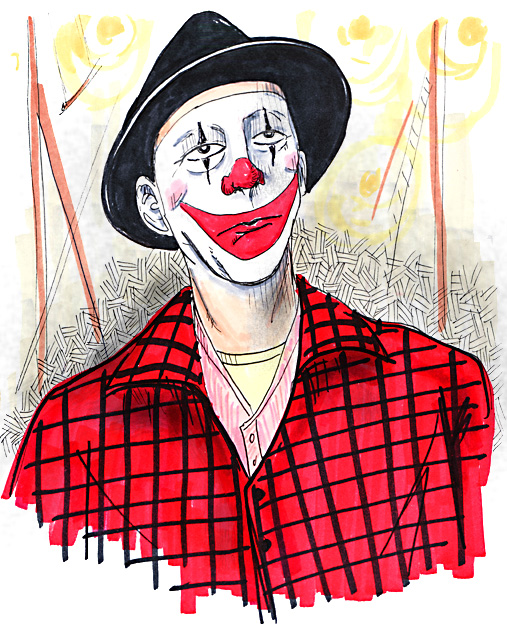 The 1953 Best Picture Oscar went to Cecil B. DeMille’s The Greatest Show on Earth, an overblown, long-winded, documentary-style film depicting the many aspects and personal stories surrounding a travelling circus. The thin main plot involves a love triangle between Holly (as played by Betty Hutton at her overacting best), the vivacious golden girl trapeze artist, her rival The Great Sebastian (an over confident Cornell Wilde) and circus boss Brad Braden, who, as Holly points out, loves only the circus because he has sawdust in his veins. Brad is played by Charlton Heston in hammy serious mode. This film made Heston a star, making way for career-defining roles in Ben-Hur and The Ten Commandments.

One of the more memorable subplots featured James Stewart in one of the most unusual roles of his illustrious career. Stewart played Buttons the Clown. Buttons never appeared without his familiar makeup. When not performing, Buttons would wear his white face and red lips and nose while dressed in a flannel shirt and fedora. As the story progresses, we find out that Buttons is actually a doctor who helped end the life of his terminally ill wife. Wanted for murder, Buttons joined the circus to hide behind the clown façade. While helping Brad in the aftermath of the train wreck, Buttons reveals his secret in the presence of a police detective. As he is led away in handcuffs in full view of his circus family, Holly the aerialist sadly laments, “He killed the thing he loved most.”

If you can last the entire two and a half hours, you’ll see the great Stewart without his clown makeup. Or you can watch Vertigo if you don’t have that much time.