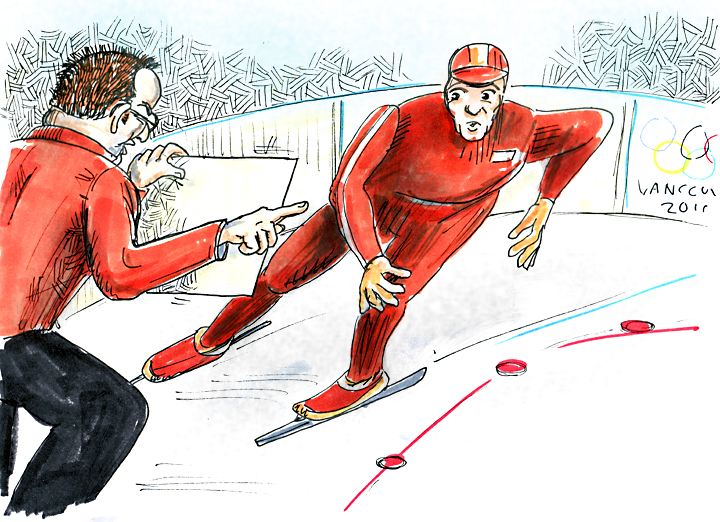 I am not a fan of the Olympics. I never have been. I have watched a total of fifteen minutes of the 2010 Winter Olympics. I watch the highlights in the morning on The Today Show before I go to work. According to NBC’s Today Show, there has been no other important or life-changing news in the world except the Winter Olympics. NBC has presented the Olympics less as a sporting event and more as a dramatic television series, playing up stories of injuries and hopes and family loss and aspirations, aiming right for America’s heartstrings.

One story this week caught my attention, but for the wrong reason. Twenty-three year old Dutch speed skater Sven Kramer lost his bid for a gold medal in the 10,000 meter competition. Kramer was instructed by his long-time coach Gerard Kemkers to cross over into the wrong lane in his seventeenth lap. Kemkers held up and waved a hand-written sign and frantically guided Kramer to an incorrect inside lane. Despite skating the course in  a world record 12 minutes 54 seconds, Kramer was disqualified. South Korea’s Lee Seung-Hoon, who was in second place, took the gold.

Kramer threw what is commonly called “a shit fit”, for which he later apologized. A truly memorable Olympic moment.