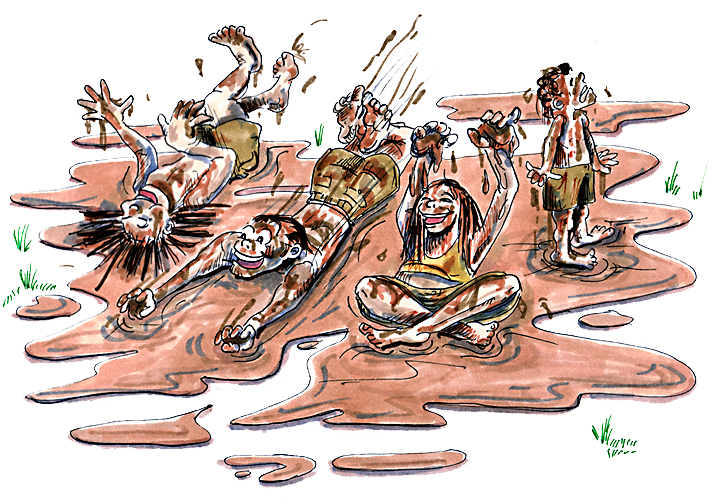 Twenty-eight and a half inches of snow fell on Philadelphia today and it got me thinking about warmer times.

On the first Saturday of June 2008, my family and I attended The Appel Farm Arts and Music Festival, an annual outdoor all-day concert. This particular show was the twentieth anniversary of the event and included such diverse performers as nerd rockers They Might Be Giants, crossover folkie Suzanne Vega, singer-songwriter Marc Cohn, 80s retro-rockers Smithereens (see my post about Smithereens frontman Pat DiNizio elsewhere on this blog) and several other lesser-known performers.

We drove a little over an hour to Elmer, a sleepy South Jersey town with a population of just over 1300. Elmer is the home of Appel Farm, a facility that, in addition to the presenting the annual Arts and Music Festival, operates a day camp for 9 to 17 year-olds. On the day of the festival, the camp amenities were closed and off-limits to the concert-going faithful. This presented a potential problem because on this particular day, the temperature at the concert grounds was in excess of 100 degrees with 100 percent humidity. At 9 AM as we passed through the entrance gates, each of us laden with bottled water and other supplies, we were already perspiring like decathlon runners. We were greeted by a crystal-blue in-ground swimming pool surrounded by a fifteen foot high chain-link fence and a huge fluorescent yellow sign printed with a single word ”CLOSED”  in large angry capital black letters. We joined the crowd of attendees trudging off to secure a cool spot on the grassy audience area. As the masses plodded along the macadam walkway, heads turned and longingly eyed the forbidden pool.

We dropped our gear on the hot grass, unfurled our blanket and, each of us grabbing a bottle of water, readied ourselves for a full day of musical entertainment. The grounds boasted two stages, each nestled in a protective cover of trees and separated by a large flat field whose perimeter was lined with local artisans displaying their wares. Off to one side of the field were several food vendors offering selections of veggie-based hippie food along with the standard over-priced hot dogs and burgers.

The scheduled performers alternated from one stage to the other. If one wished to see all of the performances, a trek across the vendors’ field was required. As the day progressed, the temperature rose like the visible steam coming off the grass. It was hot, hotter than anyone could remember. People were dumping their water bottles over their own heads. Some clever patrons came with spray bottles filled with water and kept them stowed in their coolers along with their drinks and snacks. Everyone was visibly uncomfortable and many were obviously sizing up a plan to get to that pool.

Around four o’clock, my wife, my son and I were walking back to our plot at the big stage after an energetic performance from They Might Be Giants. As we crossed the field, we spotted a crowd gathered just to the right of the fenced-in pool. As is the policy at most public swimming pools, a shower is required before entering. Appel Farm’s was no different. A large, industrial-looking pipe rose six feet out of a small concrete block embedded in the grass. The pipe was topped with a curved showerhead and long chain for activation. This set-up was outside of the confining fence and was discovered by several of the concert-going youth. The shower was situated on a sloped area that I suppose assisted in drainage. In a scene reminiscent of Woodstock, the children were soaking themselves under the shower and then sliding in the muddy runoff that was now flooding the slope of grass. The more the shower ran, the muddier the grass became. The muddier the grass became, the more kids joined in. They rushed from all directions, stripping down to shorts (some to underwear) and diving head first into the murky turf and dousing the crowd with big sloppy spatters. Some rolled around in the sodden but cooling grass. Others dropped handfuls of drippy ooze on their heads and bodies. The whole scene brought to mind a primitive tribal ritual. We were mesmerized, though not enough to join in. We hurried off the catch Marc Cohn’s set, the final act of the day. Marc, we agreed, would have to be phenomenal in order to top the performance we just witnessed.