The illustrationfriday.com challenge word this week is “memories”.
This weekend is Labor Day weekend, the unofficial end of summer. I was prompted to think of all of the things I experienced this past summer. While not necessarily the best memory of the summer, the most unusual occurred on Memorial Day Weekend, the unofficial beginning of summer. 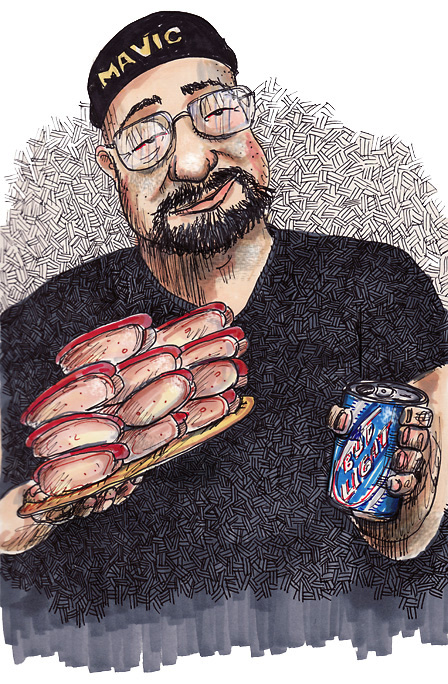 Remember The Smithereens? Y’know, that band from the 80’s… They sang that song… You remember…

Pat DiNizio is the founder of The Smithereens. In March 2007, I met Pat and the rest of The Smithereens at a “Free-At-Noon” concert hosted by local radio station WXPN. After the show, the band were slated to sign autographs. At the time, my son was an intern at WXPN and one of his duties was to escort band members to the “Meet and Greet” area. I was in line with the other fans as my son led a shuffling Pat DiNizio over the the table where the other band members had already assembled. Pat inexplicably headed right to me and hugged me, then shook my hand and personally thanked me for coming out to the show. He was very nice and gracious and he actually thought he already knew me. Although it was one o’clock in the afternoon, Pat may have been a bit sloshed. Our second meeting was at the WXPN annual summer music festival in Camden, New Jersey. The Smithereens were one of over thirty performers at the four-day festival. I saw Pat briefly and was able to get his attention and wave. He smiled broadly and waved back. Again, Pat was probably soused. Christmastime 2007 brought The Smithereens back for another WXPN Free At Noon show. After the show, Pat gave my wife and me a big “Hey Man” from the autograph table. I am not convinced he remembered me. I think he’s just a friendly guy.

For the past several years, Pat DiNizio has opened up his backyard for his annual Memorial Day Barbecue and Fan Appreciation Concert. For an admission of $50 a person, it’s all you can eat and drink plus all the music you can absorb. The event has been advertised on Pat’s website. I suggested to my family that it would be a cool idea to attend this event. We had no plans for weekend. I said it would be a great experience. If we had a great time, then great! If it sucked, then we’d have a great story.

For the sake of avoiding a long and drawn-out explanation of my family’s dietary restrictions, let’s just say we are vegetarians. I emailed Pat to inquire about the menu before I shelled out $150 for the three of us. I told him we were vegetarians and hoped there would be something available for us to eat. The Smithereens were on a West Coast tour. Pat stated in his “Greetings from San Francisco” email reply: “Its going to be mostly hamburgers and hotdogs, typical 1950s and 1960s picnic-type stuff, but I also usually always have a selection of veggie burgers, and chicken and turkey franks for the non-beef eaters. I could pick up some tofu and veggie burgers, and there will be potato salad, green salad, vegetarian beans, (as well as pork and beans), but, well, you know, how it is, most people like meat, chicken and fish, so it leans towards that area I was a vegetarian from 1974 until around 1979 and there was NOTHING commercially available to us anywhere, just health food store stuff! It was SO difficult and I was a total outcast, too! I am still primarily a vegetarian as well, too, so feel free to bring your own favorite foods. Hope you can make it over!”

I sent Pat an electronic payment of $150 and we suddenly had plans for Memorial Day.

We drove two or so hours to Scotch Plains, New Jersey. The DiNizio residence was guarded by a tattooed gentleman with a cigar and a sleeveless Harley-Davidson shirt. He was checking admission receipts. He couldn’t locate the submission date on mine, until I pointed it out to him. He smiled a gap-toothed grin and granted us access. Pat’s backyard was small and narrow. It was set up with several long picnic tables butted up to each other. The tables were sheltered by a very long and narrow commercial-variety pop-up canopy. Wedged into an awkward corner of the yard was the grill, which was laden with hot dogs. An adjacent table was stocked with cole slaw, potato salad and a well-worn, opaque, Tupperware-style container. On the lid was a length of masking tape on which was scrawled “vegan”. I was not convinced, so I steered clear. Under the table were numerous insulated coolers housing more beer than Milwaukee.

Off to one side was a makeshift stage, also covered with a canopy. There were microphones and several guitars in stands. A fellow took the stage and began setting up a laptop computer. He approached one mic and thanked Pat for having this barbecue and informed the small crowd that he was the warm-up for the main performance. He strapped on an acoustic guitar and, with the accompaniment of a karaoke computer program, treated us to an over-long set of classic rock songs. From the renditions of a few of the songs, I wondered if he had ever heard them before.

We spotted “The Thrilla” (current Smithereen’s bassist Severo Jornacion) milling around the yard. He and Pat finally began the began the featured performance. They were joined by a friend of Pat’s on guitar and a drummer that Pat claimed he found on Craig’s List. The quartet performed several Smithereens hits, several Beatles songs and a few Smithereens album tracks. The Smithereens had a hit in 1990, a duet with the Go-Go’s Belinda Carlisle, called “Blue Period”. The “backyard band” performed this song with a woman who was not Belinda Carlisle. Pat announced that there would be a brief intermission so everyone could eat. My family and I loaded up plates of cole slaw, grabbed a couple of Pepsis, took a seat under the canopy opposite the stage, and observed  the interesting people in attendance.

Pat was playing the model host, carrying a huge tray that was abundant with hot dogs. He approached my family and offered from his tray. I identified us as the vegetarians. He asked if we brought food for ourselves. I said we were okay and we were able to find enough to eat.

Soon, Pat returned to the stage and sang a few acoustic numbers and a few more Beatles songs (Pat really likes The Beatles). Several additional singers were invited to perform. These included a leather-skinned guitarist with a battered wicker cowboy hat and a guy who claimed to have written a Miller Lite jingle.

The day was winding down. Pat thanked everyone for coming. We said goodbye to Pat. We reminded him that we would see him at the Appel Farm Festival in one week. Pat gave us a blank look, as if he was not aware that his band was booked for that show or what Appel Farms was. Again, I think Pat was a bit inebriated.

On our drive home, we discussed how surreal the experience was and how we probably don’t need to go to next year’s barbecue. We also agreed that we ended up with a great story.

As Pat has sung many, many times – “Only a memory…”