The current challenge on the Illustration Friday is “confined”. 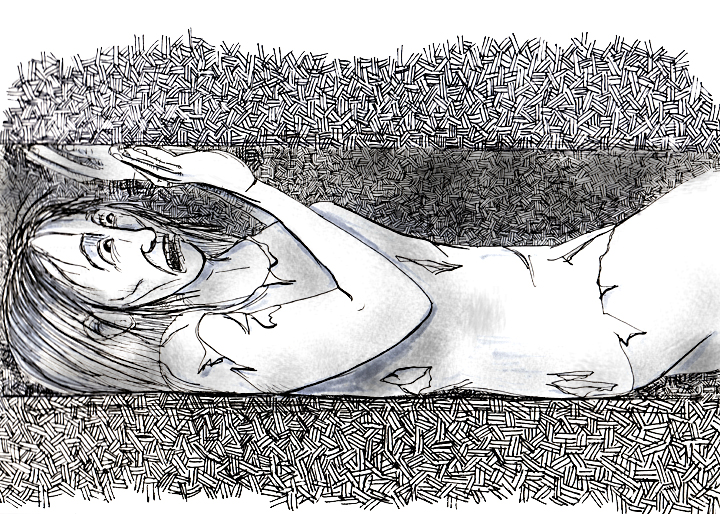 Colleen Stan’s seven year nightmare began when she was hitching a ride to a friend’s birthday party in May 1977.

Twenty-year old Colleen accepted a ride from a couple with a baby. While they drove, the man, Cameron Hooker, made idle conversation with Colleen as she sat in the back seat with his wife, Janice, and the baby. Soon, Hooker drove to a remote area and shut off the car’s engine. Janice took the baby and left the car. Colleen was confused, until Hooker put a knife to her throat and told her he would kill her if she didn’t do as he instructed. Hooker blindfolded and handcuffed Colleen. Janice returned to the car and they resumed driving. Unknown to Colleen, Hooker had made a deal with his wife. He would allow her to have a baby and, in exchange, he would be allowed have a fantasy slave.

They arrived at the Hooker home and Colleen was led to the basement where she was stripped naked and hung by her wrists several feet off the ground. Hooker and his wife had sex on the floor beneath Colleen. Sometime later, Hooker returned alone to beat and torture Colleen. He did this regularly, sometimes several times a day. When she wasn’t being tortured, Colleen was confined to a locked wooden box hidden beneath Hooker’s bed. After seven months of regular beatings and rapes, Colleen was forced by Hooker to sign a slavery contract that he had prepared. He convinced Colleen that their activity  their every move was being watch by a powerful, all-seeing organization called “The Company”. He created an elaborate story about “The Company” finding her family and killing them if she tried to escape. Constant reinforcement of this idea eventually brainwashed Colleen. Her daily routine of torture, beatings and rape continued for years, as did her confinement to the wooden box.

After four years, Colleen was granted privileges including permission to work in the Hooker’s yard and care for the Hooker’s children. (Janice had delivered a second baby on the bed under which Colleen was held captive.) Colleen was even allowed to visit her family, while accompanied by Hooker posing as her boyfriend. She was so terrified by the idea of “The Company” that she did not dare reveal the truth about her situation to her parents. She appeared happy and smiling. Her parents were concerned at first, but they were so pleased to see her, they didn’t wish to pressure her, fearing they’d never see her again.

Hooker told Janice he wanted more slaves. Janice was fearful of her husband for years, but that suggestion was all she could take. After seven years, in August 1984, while Hooker was at work,  Janice told Colleen “The Company” didn’t exist. She drove Colleen to the bus station and then went to the police. Janice told of Colleen’s abduction, the torture, the beatings and the brainwashing. She eventually testified in court against her husband. Hooker was sentenced to 104 years in prison. Janice and Colleen were relocated with new identities.