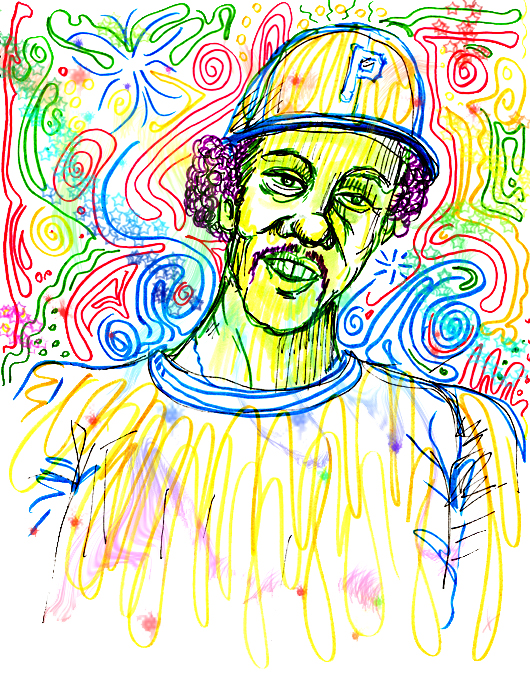 Pittsburgh Pirates pitcher Dock Ellis had, if anything, a colorful career with a lifetime win-loss record of 138-119 and a career earned-run average at a respectable 3.46.

His career was highlighted by events including famously beaning Reggie Jackson in retaliation for a home run in the 1971 All Star Game. In 1972, Dock was sprayed with mace by a security guard at Cinncinati’s Riverfront Stadium. The guard claimed that Dock had not properly identified himself and made threatening gestures with his fist. Dock said he was merely displaying his World Series ring to the guard. In May 1974, Dock decided to hit every player in the Cincinnati Reds’ lineup. Dock hit Pete Rose, Joe Morgan, and Dan Driessen in order in the top of the first inning. The fourth batter, Tony Perez, avoided Dock’s close pitches and drew a walk. The next batter was Reds’ catcher Johnny Bench. After two pitches aimed at Bench’s head, Dock was removed from the game by Pirates’ manager Danny Murtaugh.

But it was on June 12, 1970 that Dock achieved a record that still stands today. He became the only pitcher in professional baseball history to pitch a no-hitter while under the influence of LSD. Dock and the Pirates flew in to his hometown of Los Angeles for a road trip. He asked his manager if he could go home since he was not scheduled to pitch for two days. Granted permission for a day off, Dock took some LSD at the airport and went to visit some friends. Upon his arrival at his friend’s home, Dock began to experience a full-force acid trip and passed out. He woke up just long enough to take some more acid before he was awakened an hour later by his friend’s girlfriend, when she asked “Don’t you have to pitch today in San Diego?” Dock answered “No, I’m pitching tomorrow.” She informed him that he had been “out of it” for an entire day and it was  tomorrow. She showed Dock that day’s newspaper as proof and Dock panicked. He rushed to the airport and arrived in San Diego two hours before game time. As Dock later related, he was as “high as a Georgia pine.”

Dock took the mound and in the course of nine innings  where he claimed the ball was huge and then small; where he sometimes saw the catcher’s glove and sometimes not; where he dodged balls he perceived as line drives, but actually came nowhere near him  he struck out six and walked eight. Aided by excellent fielding from second baseman Bill Mazeroski and center fielder Matty Alou, Dock pitched a no-hitter nonetheless. The Pirates beat San Diego 2-0.

Dock bounced around on four more teams in his later years, finally calling it a career back in Pittsburgh in 1979. After retirement, Dock, a long-time alcoholic, was diagnosed with cirrhosis of the liver. He passed away in 2008, while on the list for a transplant.