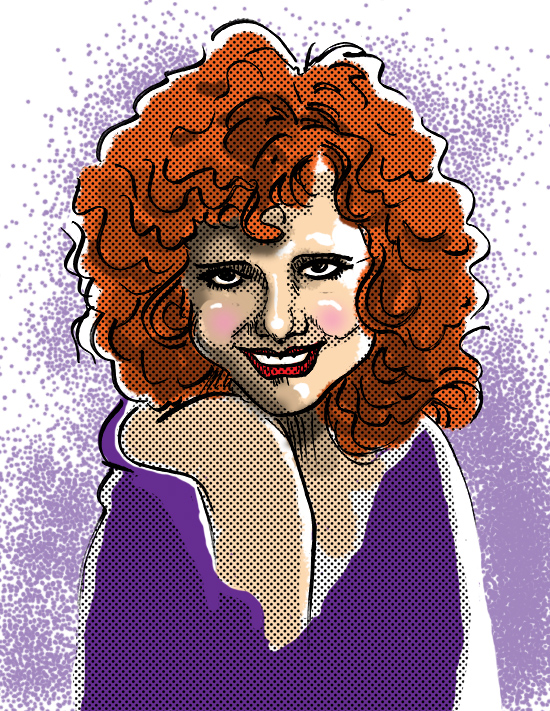 Clara Bow was born in a Brooklyn slum. She was the third child; the first two, also daughters, died in infancy. Between 1905 and 1923, the Bows lived at at least 14 different addresses. Aside from being a weak provider, Clara’s father, Robert was often gone, leaving his family without means to survive, forcing Clara’s mother, Sarah, to become a prostitute. Clara came to understand that a visiting “Uncle” meant food on the table.

At sixteen, young Clara entered a contest in Motion Picture magazine, the grand prize being a part in a film. A cheap Coney Island photographer took two pictures of her which she delivered to the magazine in person. The secretary who accepted them wrote on her entry form “Called in person. Very pretty.” After numerous screen tests, Clara was selected the winner, and she debuted in Beyond the Rainbow in 1922. Sarah Bow suffered from psychosis due to epilepsy. She was subject to seizures, delusional ideas, paranoia and aggressive behavior. Her illness became progressively worse and when she realized her daughter was set for a movie career, she found it disgraceful. One night Clara woke up with a butcher’s knife against her throat but managed to fend her deranged mother off. In the morning, Sarah had no recollection of the episode. Eventually Sarah was committed to a mental institution.

Throughout her career, Clara was involved romantically with many co-stars and directors. Clara made almost forty films between 1922 and 1927 when she starred in “It”. With this performance, Clara hit the height of her popularity. Clara became Hollywood’s It Girl. According to the film, “It is that strange magnetism which attracts both sexes…entirely unself-conscious…full of self-confidence…indifferent to the effect”. This image was enhanced by off-screen love affairs. She was very open  for the 1920s  about her sexual escapades with many famous men of the time. Bela Lugosi, Gary Cooper, Gilbert Roland, John Wayne, director Victor Fleming, and John Gilbert were all reputed to have been among her many lovers. In 1929, Lugosi’s wife, Beatrice Weeks, cited Clara as the other party in their divorce.

However, most of Hollywood considered her socially undesirable. Clara was not liked by other women in Hollywood. No matter how great her popularity, Clara’s bohemian lifestyle, thick Brooklyn accent and dreadful manners pegged her as a low life and a disgrace to the community.

In 1927, Clara starred in Wings, a  film that went on to win the first Academy Award for Best Picture. Clara’s career continued into the early sound film era, but she began experiencing microphone fright. A nervous Clara had to do a number of retakes on the set of The Wild Party because her eyes kept wandering up to the overhead microphone. However, her performances in sound films improved, and she continued to be a box office success.

In 1932, Clara married cowboy actor Rex Bell. Opting for motherhood over acting, Clara retired from films in 1933 at the age of 28. In 1944, while Bell was running for the U.S. House of Representatives, Clara attempted suicide. In 1949, she checked into a medical facility to get treatment for her chronic insomnia. Shock treatment was tried and numerous psychological tests performed. Clara was diagnosed with schizophrenia and her insomnia was attributed to childhood trauma. Clara spent her last years in a modest house in Los Angeles under the constant care of a nurse, living off an estate worth about $500,000 at the time of her death. She died on September 27, 1965 of a heart attack while watching a Gary Cooper movie.