The current challenge on the Illustration Friday website is “pattern”. 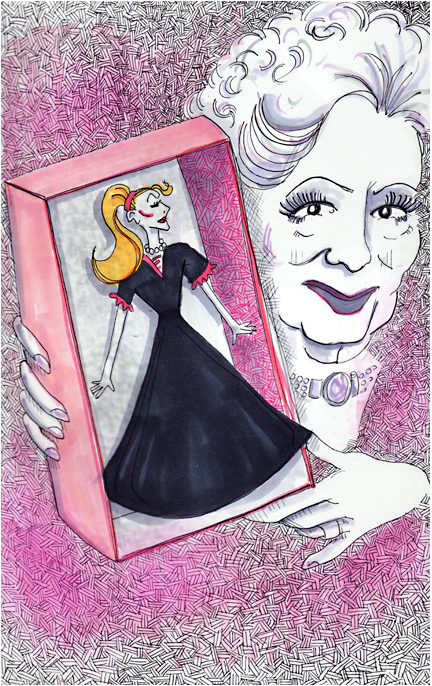 ” I thought if only we could take this play pattern and three dimensionalize it, we would have something very special. “
 — Ruth Handler

In 1945, Elliot Handler and Harold “Matt” Matson founded a small toy company. They called their new venture “Mattel” by combining part of their names and began manufacturing dollhouse furniture. They added to their toy line and soon had a top seller with the “Uke-a-doodle”, a toy ukulele.

Elliot’s wife Ruth noticed their daughter Barbara preferred playing with her infant dolls by giving them adult roles. Ruth presented the idea of an adult doll for girls, instead of those in the form of babies. On a European trip, Ruth bought a German Bild Lilli doll, not knowing that it was not intended for children but sold as a gag gift for adults. Ruth reworked the design of the German fashion doll, named it for her daughter and, in 1959, the Barbie doll made its debut.

It was an instant hit.

Ruth became president of Mattel in 1967. She and her husband resigned from their positions at Mattel in 1975 under allegations of stock manipulation and fraudulent reporting to the SEC. Ruth passed away from complications from colon cancer in 2002.