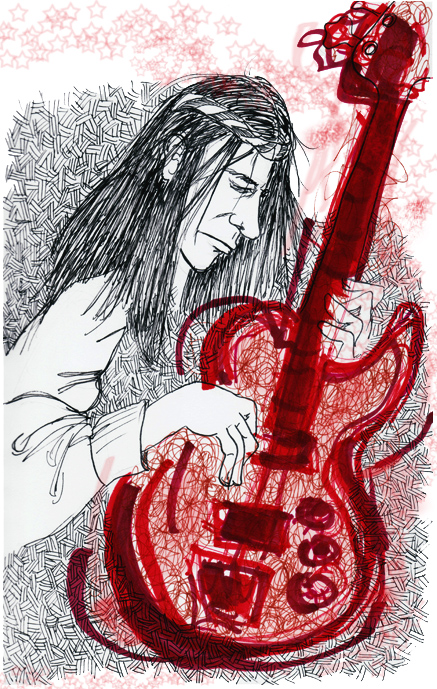 In 2006, Jaco Pastorius was voted “The Greatest Bass Player Who Has Ever Lived” by reader submissions in Bass Guitar magazine. His short, but extremely influential career ended abruptly, but not unexpectedly.

From unlikely beginnings in Norristown Pennsylvania, Jaco Pastorius moved with his family to Fort Lauderdale, Florida at a young age. He started his first band in high school as a drummer. A football injury to his wrist ended his drumming aspirations and he took up the electric bass to fills a void left by a departed band member. Jaco, however, longed to play the upright bass. He tried to save money to purchase one, but his meager savings didn’t increase quickly enough. At the time, Fender didn’t make a fretless bass. One day, he pried the frets out of his electric Fender bass with a butter knife. He filled the gaps in with wood putty and covered the neck with marine varnish. He listened to and his playing was influenced by jazz bassists like Jerry Jemmott and Harvey Brooks. He performed with his friend, jazz guitarist Pat Metheny. Jaco recorded and released his self-titled debut album in 1976.

Soon after the release of his debut, he joined the band Weather Report. Jaco entered Weather Report during the recording sessions for Black Market, and he became a vital part of the band because of the quality of his bass playing, his skills as a composer and his exuberant showmanship on stage. One night before a gig, Jaco was offered a drink to loosen up. Jaco had never drank liquor before due to his father’s own struggles with alcohol, but after two drinks, he started throwing things and became erratic. Jaco’s drinking grew more out of control as the years progressed. On the verge of being fired in mid-tour, Jaco apologized profusely to Weather Report keyboardist Joe Zawinul, and was admitted back into the group.

In the mid 80s, Jaco began to experience increasingly severe mental health problems. These were worsened by drug and alcohol use, and he was eventually diagnosed as suffering from bipolar disorder. He had to be pulled off stage during the 1984 Playboy Jazz Festival because of his drunkenness. His unpredictable behavior made him an outcast in the musical community. He was relegated to performances at smaller venues, but as his behavior became too much, he was banned by one club after another.

In 1987, after sneaking onstage at a Carlos Santana concert, he was ejected from the premises. He made his way to the Midnight Club in Wilton Manors, Florida. Jaco kicked in a glass door after being refused entrance to the club. He was then severely beaten by the club’s bouncer. Jaco was hospitalized for multiple facial fractures, damage to his right eye and right arm, in addition to irreversible brain damage. He fell into a coma and passed away on September 21, 1987 at 35.