The illustrationfriday.com word this week is “adapt”. 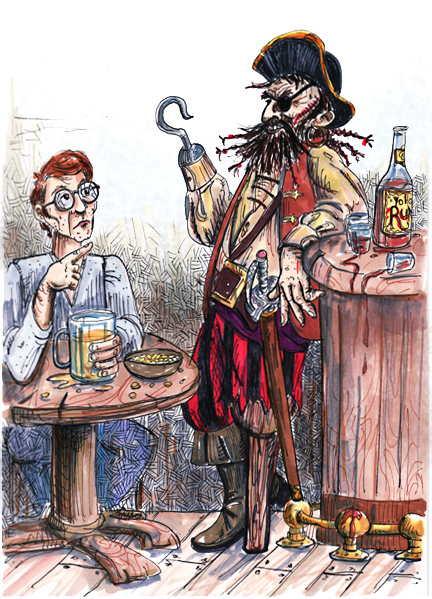 A man is sitting at a table in a bar having a beer. He looks up and sees a interesting looking guy standing at the bar. The guy has a wooden leg, a hook for a hand and an eyepatch. He’s dressed in stereotypical pirate garb. The man thinks this is a once-in-a-lifetime encounter and gets up enough courage to ask the guy if he’s a real pirate.

The man is fascinated. He begins questioning the pirate for more information. “You must have some great stories of adventure.” he began, “Like, how did you get the wooden leg?”

“Avast ye!,” the pirate says, “I was out on me ship, raising sheets on the yardarm. Some rough winds knocked me overboard. I got into a tangle with a forty foot shark. I drew my dagger and fought the beast as best I could, but he chomped off me leg. Me crew dragged me waterlogged body back on board. We docked in Port Au Prince in the Gulf of Gonâve. The village barrelmaker, who doubled as a doctor, fitted me the the wooden leg.”

“Wow! What a story! How about the hook? How’d you get the hook?,” the man eagerly inquires.

“Shiver me timbers!,” the pirate begins, “Just off shore at Barbados, me ship was shanghaied by a band of cut-throats as mean as me own. I engaged in swordplay with one of the motley bunch and, in the fit of battle, the scalawag sliced me hand off at the wrist. Me crew finally forced the scurvy dogs to retreat. At our next port, a silversmith forged this hook as a replacement for me own lost mitt.”

“Incredible!,” the man says, caught up in the pirate’s epic tale, “How about the eyepatch? How’d you get that?”

The pirate sort of shuffled, stares at the floor and answers, “Uh, a seagull crapped in me eye.”

The man was shocked. “That’s IT ?, ” he says, “A seagull? You tell me great stories of shark attacks and sword fights and the best story you can tell for your eyepatch is a seagull crapped in your EYE ??? “

The pirate answers, “It was me first day with the hook.”