The challenge word on illustrationfriday.com this week is “fleeting”.  When I did this illustration, I had a totally different narrative planned. I have since changed direction but the illustration still fits, albeit a stretch. 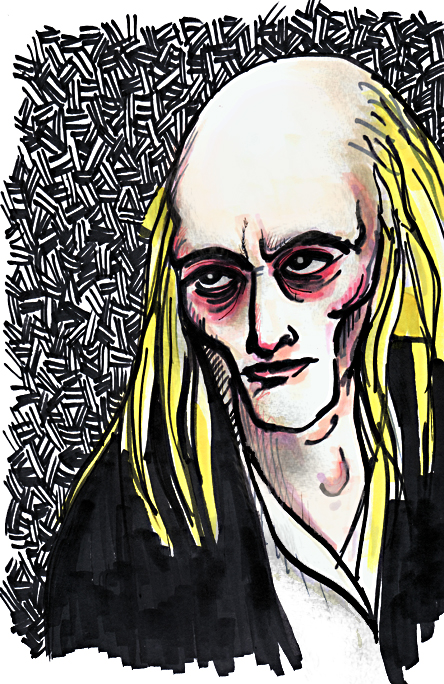 In 1984, I graduated from the Hussian School of Art, a small but respected vocational art school in center city Philadelphia. Several hours ago, I returned from an informal Hussian class of ’84 reunion, reacquainting myself with many classmates, some of which I had not seen in twenty-five years.

In February of this year, I was contacted by John Errichetti (the first person I talked to on my first day at Hussian). John got my work number from LinkedIn.com. (Don’t try to find me. I’m not listed under “Josh Pincus”.) He left a voicemail on my office phone. I hadn’t spoken to John in a few years, so I called back. John told me he toyed with the idea of leaving a disguised voice message, identifying himself as the father of a twelve-year-old boy he claimed I was molesting and he needed to talk to me. He asked, “Would you have called me back?” “No.,” I answered, “I would have deleted the message.” He informed about the sketchy details of the reunion. The location — McGillin’s Olde Ale House, a frequent haunt during my art school days — was a place with which I was familiar, although I wasn’t sure if I would be able to find it sober.

This afternoon I hopped on the R1 train with apprehension in my gut. I was headed to see a group of people that I saw every day for four years, and then, suddenly, hadn’t seen in twenty-five. Twenty-five years is a big gap in one’s life. Many, many things happened in twenty-five years. I got married two months after my graduation. Both of my parents have passed away. I have a grown son that none of my classmates ever met. I’ve worked at twelve jobs in twenty-five years. I began to force my mind to think of people and incidents that hadn’t crossed my mind in years. This was going to be weird.

I hurried through the wet streets of Philadelphia and made my way to narrow Drury Lane and to McGillin’s front door. I took a deep breath, grabbed the door handle and entered. The darkened tavern was instantly familiar. I turned to the left was greeted by a chorus of “Oh my Gods!” from a small group of unfamiliar faces, some of whom extended welcoming hands to me. I thought, “Oh shit. I don’t know who these people are.” The group began to identify themselves. I knew them all, even if their visage didn’t strike a chord in my usually-flawless memory. Slowly, I matched the faces to those memories from a quarter-century ago. I ultimately remarked that I felt as though I arrived in a DeLoreon pumped with 1.21 gigawatts of electricity.

I spent an ephemeral afternoon of reminiscing about days long gone, events long past and friends long forgotten. As the day progressed, late arrivals added to the group. Former classmates drifted about, assembling into small groups, breaking apart and reassembling. Of course, there was the obligatory “what are you doing” conversation. But, the talk generally stuck around “remember this” and “remember that”. It was truly enjoyable to discuss and share a part of my life that had been stored in some dark recess of my brain with the people who were key players in those experiences. There were a couple of people, I am sad to say, I didn’t not recognize and even after an explanation, I did not remember. Time was kind to several of the lot, specifically the five female classmates that bravely mingled among the predominantly male gathering. I was disappointed that certain classmates were not able to make it. Conversely, I was happy that others were not able to make it.

During a conversation with classmates Tom Romano and Lorin Stein, Tom chuckled and reminded me of my affinity for The Rocky Horror Picture Show. Lorin laughed too, adding,”You saw that movie, like, 10-15 times, right?” I glanced at the floor. “More like a hundred and fifty times.”, I sheepishly corrected. It was funny that Tom brought up Rocky Horror, as just before I left my house, I had completed the illustration above. How fitting the words of Richard O’Brien from the song The Time Warp —