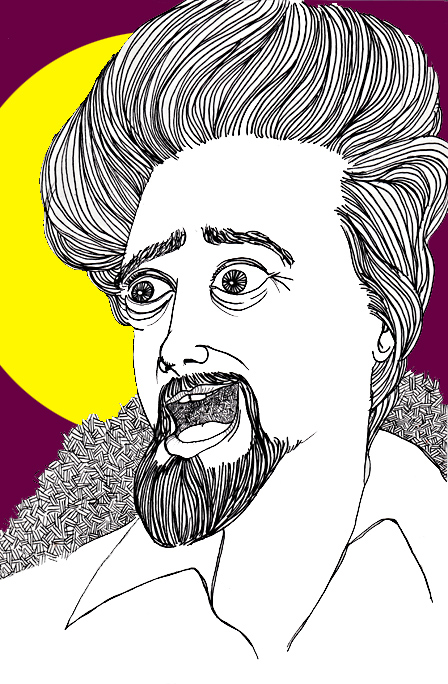 In 1960, 22 year-old budding DJ Robert Smith began his career as Daddy Jules on a Newport News, Virginia station. In 1962, Smith moved to a station in Shreveport, Louisiana and became Big Smith. It was here that he first began to develop his famous alter ego Wolfman Jack. Later in ’62, Smith was recruited by a Mexican radio station whose high-powered “border blaster” signal could be picked up across much of the United States. Smith’s on-air “Wolfman Jack” persona developed. With phrases like “Who’s this on the Wolfman telephone?”, his national fame and popularity spread.

In the early days, Wolfman Jack made public appearances, usually as an Master of Ceremonies for rock bands at local Los Angeles clubs. At each appearance he looked a little different because Smith hadn’t decided on what “The Wolfman” should look like. Early pictures show him with a goatee; however, sometimes he combed his straight hair forward and added dark makeup to look somewhat “ethnic”. Other times he had a big afro wig and large sunglasses. The ambiguity of his race contributed to the controversy of his program. It wasn’t until he appeared in the 1969 film A Session with the Committee (a montage of skits by the seminal comedy troupe The Committee) that mainstream America got a good look at Wolfman Jack.

In 1973 he appeared in director George Lucas’ American Graffiti, as himself. His radio broadcasts are featured throughout the film and, in a pivotal scene, Richard Dreyfuss’ character meets the mysterious Wolfman. In gratitude for Wolfman Jack’s participation, Lucas gave the Wolfman a percentage of the profits from the film. The extreme financial success of American Graffiti provided him with a regular income for life.

Wolfman Jack’s popularity grew throughout the 1970s and early 80s. He was the regular announcer and occasional host of NBC’s concert show The Midnight Special  in addition to numerous appearances on various popular programs.

Wolfman Jack was also the host of a nationally-syndicated radio show. On June 30, 1995, he had finished broadcasting his last live radio program, a weekly program nationally syndicated from Planet Hollywood in downtown Washington, D.C. That night, the Wolfman said, “I can’t wait to get home and give Lou [his wife] a hug, I haven’t missed her this much in years.” Wolfman had also been on a lengthy promotional tour for his new autobiography “Have Mercy!”. When he got home to North Carolina, he entered his house, hugged his wife, said “Oh, it is so good to be home!”, and died in her arms.