This week’s challenge word on illustrationfriday.com is “time”. 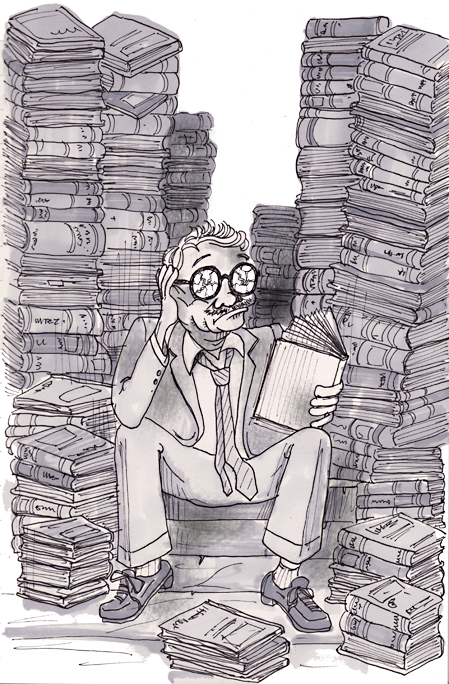 In “Time Enough At Last”,  the eighth episode of the first season of “The Twilight Zone”, Burgess Meredith played bank teller Henry Bemis. Henry Bemis loved to read. He would read on his way into work. He would covertly pull out a book to read between serving bank customers. He was totally captivated by the printed word. He wanted to engage in discussions and excite others about what he had read but, alas, no one remotely shared his interest. As a matter of fact, he was often reprimanded for his constant reading. One day Henry sneaks off to the solitude of bank’s vault to read. Huge explosions can be heard erupting outside the shelter of the vault. However, the bank is rocked violently and Henry is knocked unconscious. When he awakens, he finds that a devastating war has wiped out everyone and he is the last person on Earth. He wanders through the rubble that was once civilization, passing the ruins of familiar buildings. He finds enough food to last him a lifetime, but the lack of companionship is maddening. He is about to commit suicide with a gun when he sees the remains of a public library. He discovers volume after wonderful volume  all intact and waiting to be read. Enough books to read and enjoy and be undisturbed forever. He neatly arranges the tomes in stacks, by subject and projected reading date. Then, as Henry is about to begin his dream of an endless reading adventure, he stumbles. His thick-lensed glasses fall to the ground and shatter. In tears, he picks up the remnants of his glasses and sobs, “That’s not fair. That’s not fair at all. There was time now. There was all the time I needed… !”

(My other favorite Twilight Zone episode also involves a book.)