The illustrationfriday.com challenge word this week is “rambunctious”. 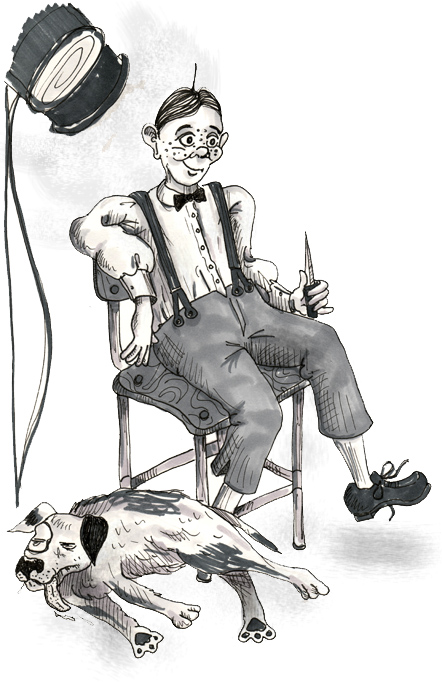 Carl Switzer, and his older brother Harold, were discovered by producer Hal Roach while they were on a studio tour with their parents. The Switzer brothers were singing in the studio commissary and Roach was impressed by the performance. He signed the Switzer kids to appear in the “Our Gang” film series. Harold was nicknamed “Slim”. Carl was dubbed “Alfalfa.”

The Switzer brothers first appeared in the 1935 Our Gang short, “Beginner’s Luck”. By the end of the year, Alfalfa was one of the main characters in the series, while Harold had been relegated to the role of a background player.

Alfalfa had a mischievous and sometimes cruel sense of humor. To keep himself entertained during long stretches of filming, he took to playing tricks on his fellow cast and crew members. He once put fish hooks in the pants of Our Gang co-star George “Spanky” McFarland. Spanky suffered severe cuts that had to be closed with stitches. Another time, Alfalfa tricked co-star Darla Hood into putting her hand in his pocket, telling her he had a ring for her, but in reality it was an open switchblade knife. Hood almost lost her fingers from that incident.

Though he and Spanky got along, Alfalfa’s best friend among the Our Gang kids was Tommy Bond, who played his on-screen nemesis “Butch”. Bond and Alfalfa became good friends because they played opposite characters and there was no fear that one could ever replace the other.

After Hal Roach sold Our Gang to MGM Studios in 1938, the now-adolescent Alfalfa’s behavior was even more extreme. He often sabotaged the production of the Our Gang films. Once, during a break in filming, Alfalfa urinated on the set’s lights. When filming resumed, the lights heated up and filled the set with such a stench that filming had to be halted for the rest of the day. On another occasion, intending to get back at a rude cameraman, Alfalfa convinced the other kids to chew as much gum as they could, and then stuffed the wads of spent chewing gum inside the camera.

At twelve years-old, Alfalfa’s tenure with Our Gang had ended. He went on to appear in bit parts in Going My Way, Courage of Lassie, and It’s a Wonderful Life  (he was the little bastard who opened the gymnasium floor during the dance).

After his demand waned and the acting roles dried up, Alfalfa worked as a bartender while running a successful business breeding hunting dogs and offering guided hunting expeditions. Notable clients included Roy Rogers and Dale Evans, and Jimmy Stewart.

As part of one of those hunting expeditions, Alfalfa had borrowed a dog from a friend, Moses Stiltz. The dog was lost, but eventually found. Alfalfa rewarded the man who returned the dog $35 and bought him $15 worth of drinks from the bar at which he was working. Alfalfa felt that Stiltz should reimburse him for the reward money  after all, it was Stiltz’s dog. On January 21, 1959, an intoxicated Alfalfa, along with his friend, Jack Piott, arrived at the home of Moses Stiltz to collect the money he felt he was “owed”. Alfalfa banged on Stiltz’s front door, demanding, “Let me in, or I’ll kick in the door.” Once inside, Alfalfa and Stiltz got into an argument. Alfalfa insisted to Stiltz, “I want that 50 bucks you owe me now, and I mean now.” When Stiltz refused to hand over the money, the two came to blows. Piott  struck Stiltz in the head with a glass-domed clock, drawing blood from his left eye. Stiltz retreated to his bedroom and returned wielding a loaded .38-caliber revolver. Alfalfa struggled to get the gun away from him, resulting in a shot that hit the ceiling. Alfalfa forced Stiltz into a closet, despite Stiltz having regained possession of the gun. Filled with drunken rage, Alfalfa pulled a switchblade knife and screamed, “I’m going to kill you.” He opened the closet door and lunged at Stiltz. Stiltz raised the gun and shot Alfalfa.

Alfalfa was taken to the hospital and pronounced dead on arrival from massive internal bleeding. He was 31 years old.
Now, that’s rambunctious.

One of the dogs that played Petey was poisoned during the time that Our Gang was in production. It was not pinned on Alfalfa.