Last week, I resigned as a member of the weekly illustration blog, sugarfrostedgoodness.com. I had been a contributor and member since May 2007. The duration of my membership was not without its controversy (and I am all about  the controversy!) In recent months, however,  I have not been pleased with the direction in which the website was headed. It had gone from a great forum for artists to display their work to a preachy, needy, clingy “hugfest” proliferated by people who feel the need to impose their religious dogma on those who do not necessarily share their views.
I just wanted to draw.
So, I found another blog, Inspire Me Thursday*,  to which I will contribute. It works is basically the same as Illustration Friday and Monday Artday (except they post their word on Thursdays… get it? Of course you do!) Here is my first contribution for the inspiration “Albert Einstein”. Here we go, Inspire Me Thursday, hope you don’t piss me off. (*As of January 2010,  Inspire Me Thursday  is no longer an illustration showcase website.) 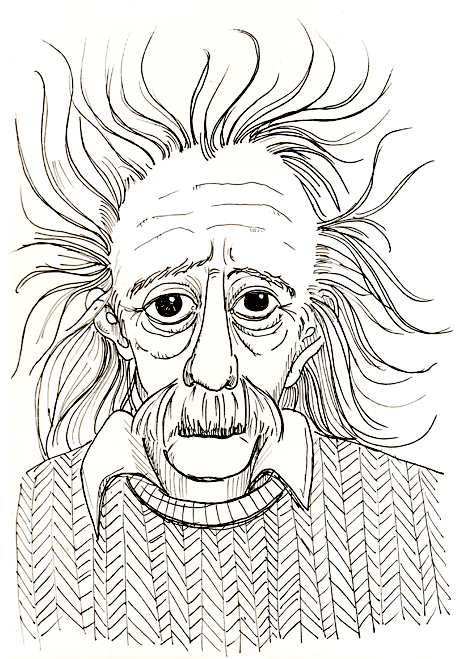 “Two things are infinite: the universe and human stupidity; and I’m not sure about the universe.”
 Albert Einstein