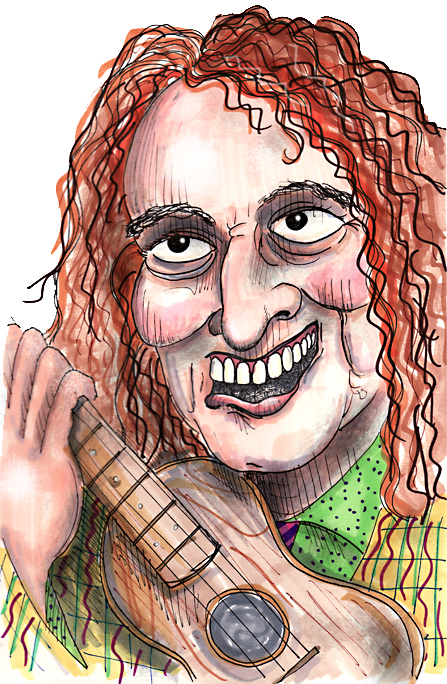 When Herbert Khaury was five, his father brought a gramophone to their small New York City apartment. Young Herbert immersed himself in the music of the past. He would spend hours in his room listening to artists like Rudy Vallee, Al Jolson, and Bing Crosby.

He began singing and playing the ukulele in his naturally tenor voice. Soon, he entered into a local talent show and sang “You Are My Sunshine” in his newly discovered falsetto voice. It brought the house down. Bitten by the performance bug, Herbert experimented with different stage names like Darry Dover, Vernon Castle, Larry Love, and Judas K. Foxglove. He finally settled on Tiny Tim in 1962 at the suggestion of his manager at the time. In the 1960s, he was seen regularly near the Harvard University campus as a street performer, singing old Tin Pan Alley tunes. His choice of repertoire and his encyclopedic knowledge of vintage popular music impressed many of the spectators. One fan recalled that Tiny Tim’s outrageous public persona was a false front belying a quiet, studious personality. “Herb Khaury was the greatest put-on artist in the world.,” this admirer said, “Here he was with the long hair and the cheap suit and the high voice, but when you spoke to him he talked like a college professor. He knew everything about the old songs.”

Tiny Tim’s big break came when he was booked for an appearance on the wildly popular Rowan and Martin’s Laugh-In. Dan Rowan announced that Laugh-In believed in showcasing new talent, and introduced Tiny Tim. Tiny Tim entered, blowing kisses, and sang “Tiptoe Through the Tulips” to Dick Martin. For years, Dick Martin delivered the panicked outburst of “You’re not bringing back Tiny Tim, are you?” to Dan Rowan at the threat of a potential surprise visit. Tiny Tim’s performance led to many appearances on Jackie Gleason’s variety show, The Ed Sullivan Show and Johnny Carson’s Tonight Show. Tiny Tim released his first album in 1968, a collection of Tin Pan Alley classics that were beloved by him as a child.

On a publicity tour in 1969, Tiny Tim met seventeen-year-old Victoria Budinger. She asked for an autograph and Tiny Tim was immediately enamored, although he was twenty years her senior. After several more encounters with “Miss Vicki”, as he called her, Tiny Tim announced his engagement on The Tonight Show and Johnny Carson offered to have the wedding televised on his show. The wedding was seen by an estimated 40 million viewers. The cake was seven feet tall, and 10,000 tulips were used as decoration. The couple honeymooned in Bermuda. However, Tiny Tim and Miss Vicki mostly lived apart, and divorced eight years later. (Vicki resurfaced in 2002 as Victoria Lombardi, the girlfriend of convicted murder conspirator Rabbi Fred Neulander.)

Tiny Tim’s popularity began to wane as the years went on. He was a yearly fixture at at “Spooky World,” an annual Halloween-themed exposition in Massachusetts, just outside of Boston. He also made frequent appearances on the Howard Stern radio show in the early 1990s.

While playing “Tiptoe Through the Tulips” at a Gala Benefit at The Woman’s Club of Minneapolis on November 30, 1996, Tiny Tim suffered a heart attack on stage. He was led off stage by his third wife, Susan Marie Gardner. She asked him if he was okay. Tiny Tim replied, “No, I’m not!”, his final words. He collapsed and died after doctors tried to resuscitate him for an hour and fifteen minutes.

A self-proclaimed deeply religious man, Tiny Tim gave an interview to Playboy Magazine in 1970. In the interview he said, “I’d love to see Jesus Christ come back to crush the spirit of hate and make men put down their guns. I’d also like just one more hit single.”