The challenge word this week on illustrationfriday.com is “wise”. 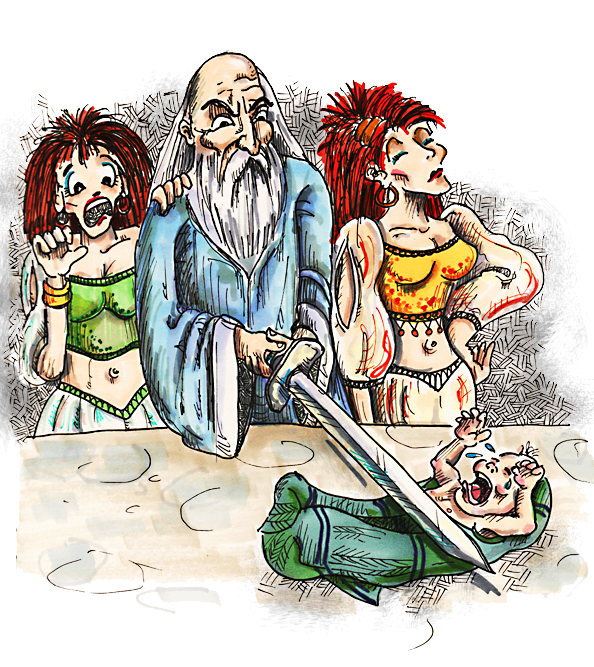 Book of Kings (chapter 3 verses 16-28)
16 Now two prostitutes came to King Solomon and stood before him.
17 One of them said, “My lord, this woman and I live in the same house. I had a baby while she was there with me.
18 The third day after my child was born, this woman also had a baby. We were alone; there was no one in the house but the two of us.
19 “During the night this woman’s son died because she lay on him.
20 So she got up in the middle of the night and took my son from my side while I your servant was asleep. She put him by her breast and put her dead son by my breast.
21 The next morning, I got up to nurse my sonand he was dead! But when I looked at him closely in the morning light, I saw that it wasn’t the son I had borne.”
22 The other woman said, “No! The living one is my son; the dead one is yours.”
But the first one insisted, “No! The dead one is yours; the living one is mine.” And so they argued before King Solomon.
23 King Solomon said, “This one says, ‘My son is alive and your son is dead,’ while that one says, ‘No! Your son is dead and mine is alive.’ ”
24 Then King Solomon said, “Bring me a sword.” So they brought a sword for the king.
25 He then gave an order: “Cut the living child in two and give half to one and half to the other.”
26 The woman whose son was alive was filled with compassion for her son and said to King Solomon, “Please, my lord, give her the living baby! Don’t kill him!” But the other said, “Neither I nor you shall have him. Cut him in two!”
27 Then the king gave his ruling: “King Solomon gets to cut…”
28 “But, Cody gets to choose.”