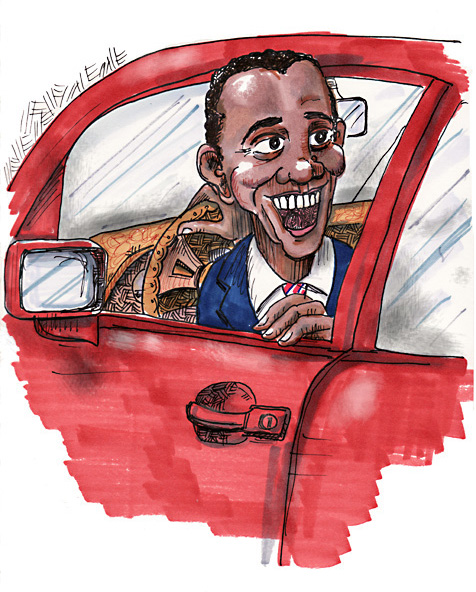 Everyone on this earth has felt some kind of unsubstantiated prejudice. At some point in their lives, everyone — the cashier at Target, Michael Douglas, the woman who takes your picture for your new driver’s license, The Pope — dislikes someone for a stupid reason. If you say “Oh no. Not me.”, then you’re prejudice and a liar.

In the weeks leading up to the recent presidential election, I have witnessed plenty of prejudice. Most people believe that everyone thinks like they do. It’s amazing the things that total strangers will say to you just because you “look like they do.” People loudly make the most racist comments and think nothing of it. While my wife was getting a manicure, a woman publicly expressed her concern about having a black president. Even Republican vice-presidential candidate Sarah Palin hinted at it.

That fact never concerned me at all. I had another concern.

Barack Obama is 47 years old — one week older than I am. In history books, in movies, on money, presidents are old guys. From the powdered wigs and mutton chops, the country’s leaders have always been stodgy, old windbags. I can imagine the fear my parents’ generation felt when they saw this inexperienced kid mounting a campaign for president! Prior to the election, I asked my father-in-law how he felt about the possibility of having a 47 year-old in the White House. I said “You don’t think a 47 year-old can back a car out of your driveway, let alone run the country.” Honestly, a president my own age didn’t sit too well with me either.

Until my 21 year-old son put it into perspective.

He said “What have old white guys ever done for you?” I pondered the question. I answered, “Well, they’ve criticized my work, talked down to me, pushed me around, exhibited incompetence in the workplace, screwed up the economy and gave convoluted and incoherent answers to questions.”

My son then asked, “What have black guys your own age done for you?” I thought about that question. I answered, “They have been pleasant, funny, helpful and shown mutual and professional respect.”

He looked at me with that look.

I hope Barack Obama takes that driveway at ninety miles an hour.