The challenge word this week on both Monday Artday and sugar frosted goodness is “olympics”. 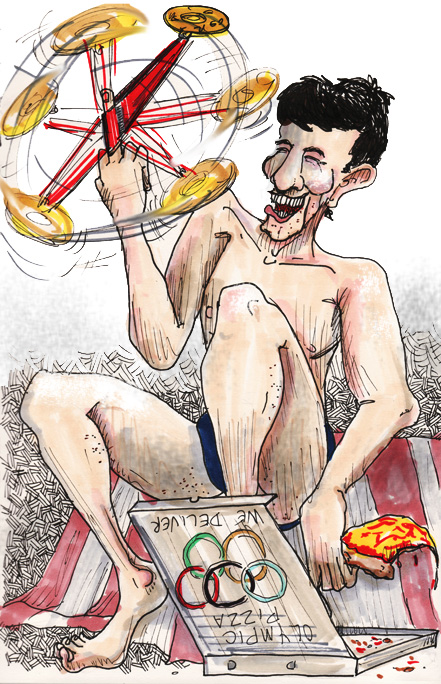 There are things I don’t  like. I don’t like being manipulated and told what to like. The media in the United States has been manipulating and telling us what to like for years. The influence of the US media combined with the complacency and short attention span of the average US citizen creates an awesome power. Most recently, we, as a society, are told by the media to give our allegiance and adoration to Britney Spears, High School Musical, American Idol, Hannah Montana and countless others. We are guided, influenced and swayed to follow the every move of someone or something that the media deems “a star”. Sure, I know it’s not a new thing. I watched “The Partridge Family” when I was a kid. My female classmates in elementary school pored over Tiger Beat Magazine. And as the years go on, the manipulation intensifies.

I watched the Summer Olympics in 1972. In the years before cable television, we only received four channels, so there wasn’t much choice. The afore-mentioned Partridge Family was pre-empted, so we watched. I remember cheering that porn star-mustachioed Mark Spitz and his incredible swimming accomplishments. I remember my mom digging Mr. Spitz for other reasons, as highlighted in his famous poster. We marveled as deadpan Russian Olga Korbut executed impossible gymnastic routines. I also remember watching live coverage of the ominous horror as the Olympic Village in Munich was infiltrated by eight Palestinian terrorists. I watched the 1976 Summer Olympics from Montreal, where Romanian darling Nadia Comăneci simultaneously won the hearts of viewers and the highest scores from judges and made us forget Olga Korbut.

In between the two Olympics in the 70s, life went on. Regular television programming was resumed and interest in discussing the Olympics waned.
From 1980 until now, I have watched approximately three minutes of the Olympics. I thought about that. I have come to believe that the Olympics are much more popular in other countries than in the United States, much like soccer. The United States media attempts to whip up interest in the Olympics because so much money is sunk into it by advertisers and NBC. Unlike professional sports like baseball or football, where fans can follow a player’s career for years, Olympic participants appear in one (maybe two) Games and then retire from their sport. With each new Games, we are presented with new athletes and their stories about which we are expected to care. They are offered in such a way that we are told “these are the people you must watch for and care about.” We are commanded to watch sporting events that, aside from two weeks at the end of summer every four years, no one gives a shit about.

I have heard more stories about Michael Phelps’ facial hair and his daily calorie intake than I really care to. He seems like a good guy. I guess it’s a good thing that he can swim fast. I suppose winning eight gold medals is good. But he’s a swimmer! A swimmer, for Christ’s sake! A guy who swims in a goddamn swimming pool! He’s not a brain surgeon. He hasn’t cured cancer. And after his endorsements run out when the “next cool athlete” rolls around, he’ll be wearing a paper hat and asking if you’d like to try the hot apple pie.

The Olympic Games have grown to over 11,100 competitors from 202 countries. Have you been following the careers of these 2008 Olympic gold medal winners?
Samuel Sánchez
Masato Uchishiba
Satu Mäkelä-Nummela
Pak Hyon Suk
Chen Ying
Elena Kaliská
I didn’t think so.

The US Olympic Men’s Basketball team brought home an unprecedented nine gold medals between 1936 and 1984. In 1996, the previously amateur basketball team was comprised of the best-of-the-best of the NBA. They easily took the gold medal in Men’s Basketball. Yesterday afternoon, 2008 US Men’s Basketball teammates, Kobe Bryant and LeBron James giggled on the bench as they watched their team trounce the Australian team by 31 points. The Coubertin Medal is awarded to athletes who exhibit the spirit of sportsmanship. It is named for Pierre de Coubertin, founder of the International Olympic Committee, whose ideals are illustrated in the official Olympic Creed:
“The most important thing in the Olympic Games is not to win but to take part, just as the most important thing in life is not the triumph but the struggle. The essential thing is not to have conquered but to have fought well.”

*Footnote: My wife is watching the Olympics as I make this post. They just presented a story during Women’s Beach Volleyball (Yes, THAT’S an Olympic event). The story told about volleyball team member Misty May-Treanor and how she brought some of her mother’s ashes (as in cremated) to sprinkle at the volleyball venue in Beijing.
I hate the fucking Olympics.