The challenge this week on Monday Artday is “hair”. 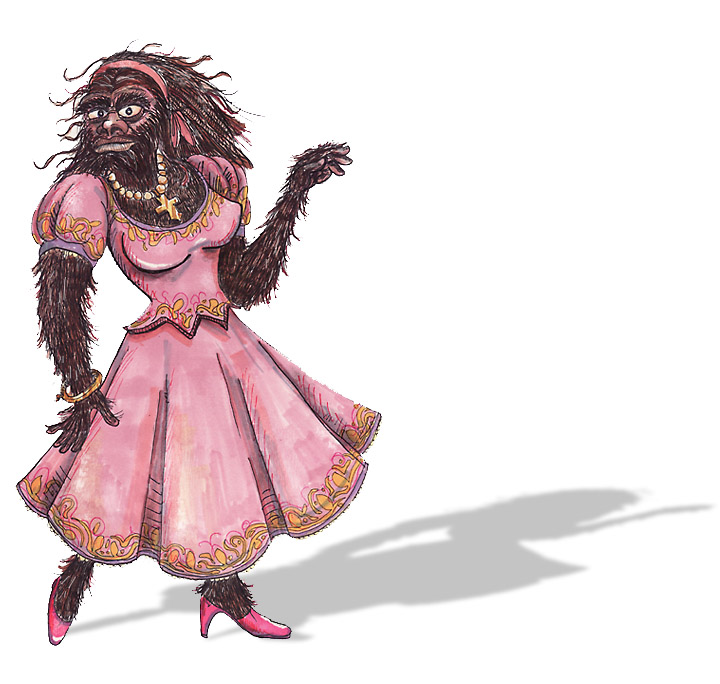 The details of Julia Pastrana’s early life are sketchy. She was discovered in Mexico where she worked as a housemaid. She had hypertrichosis terminalis. She had a beard, was covered in glossy black hair. Her ears and nose were unusually large and her teeth were irregular. Theodor Lent discovered her and purchased her from a woman who might have been her mother. Lent taught her to sing and dance and play music, preparations for Julia’s introduction to the circus sideshow where she would spend the rest of her life. She joined a traveling circus when she was 20. She was regarded as some sort of hybrid or other “freak of nature” that did not fit in the order of things. Some doubted that she was even human, as a flyer from 1854 proclaimed “its jaws, jagged fangs and ears are terrifically hideous… nearly its whole frame is coated with long glossy hair. Its voice is harmonious, for this semi-human being is perfectly docile, and speaks the Spanish language.” A sense of mysticism surrounded people and creatures that deviated from “normal” and even into the mid-19th century, it was worried that even looking at Julia would cause women to miscarry or have monstrous births of their own. Her appearance was often considered to be an obscenity not fit for the public to view.
Lent married Julia during the course of her sideshow career. She became pregnant and gave birth to a son, also covered with hair. Her son died after only 36 hours and Julia died two days later. Julia’s death did not stop Lent. He had the bodies of Julia and the child mummified and took them on an extended tour of Europe, putting them on display at any chance available, for a quick buck. Victorian England loved stories of apes, lurid tales of savage gorillas coming in from Africa and the scientific description of animals. Rather than being some monstrous aberration meant to make people turn their gaze to God, Julia now represented a “missing link,” and the popularity of apes was just too tempting for Lent to let his wife rest in peace. Julia’s mummified remains were easier to approach and many people still turned out to see her body and discuss her anatomy. Ultimately, her body and that of her child wound up in a hospital storage room in Norway where they have disappeared and resurfaced multiple times since the 1860s.