The illustationfriday.com challenge word this week is “fierce”. 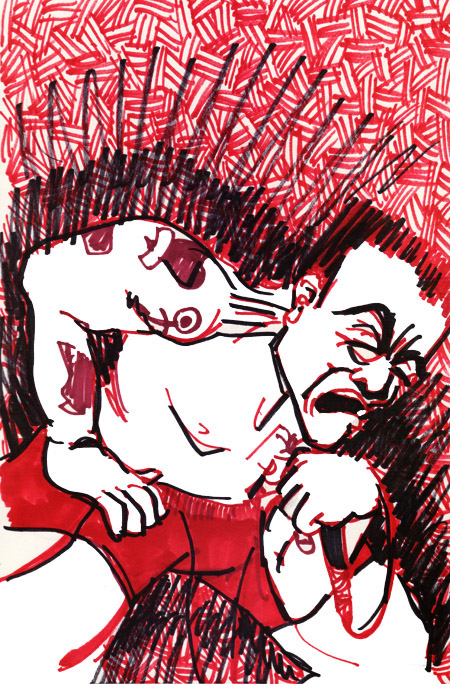 Henry Rollins is a fierce figure onstage. Born Henry Garfield in Washington, DC in 1961, Henry’s parents divorced when he was very young. He suffered from low self-esteem, a poor attention span, bad grades, a confrontational attitude, bad behavior and an uncomfortable feeling around women. He was regularly beaten up by black teenagers because of his race. He was sexually molested and lived with an abusive father. He had accumulated a lot of rage by the time he was seventeen.
He and his friend Ian MacKaye (eventual leader of Minor Threat and Fugazi and founder of Dischord Records) became involved in the Washington punk rock scene. His reputation as a singer spread throughout Washington’s underground music circle and Henry formed State of Alert with former members of Minor Threat. He financed the band’s first EP by working as the manager of a local Häagen-Dazs ice cream store.
In 1980, a friend gave Henry a copy of Black Flag’s Nervous BreakdownEP. Henry became a fan of the band, exchanging letters with bassist Chuck Dukowski and later inviting the band to stay in his parents’ home when Black Flag toured the East Coast in December 1980. When Black Flag returned to the East Coast in early 1981, Henry attended as many of their concerts as he could. At a show in a New York bar, Black Flag’s vocalist Dez Cadena allowed Henry to sing with the band. Unbeknown to Henry, Cadena wanted to switch to guitar, and the band was looking for a new vocalist. The band was impressed with Henry’s singing and stage demeanor that they asked him to become their permanent vocalist. Henry quit his job at Häagen-Dazs, sold his car, and moved to Los Angeles. Upon arriving in Los Angeles, Henry got the Black Flag logo tattooed on his left bicep and changed his surname to Rollins, a surname he and MacKaye had used as teenagers.
Rollins’ vocal style has been described as “spitting out the lyrics like a bellicose auctioneer” and his stage presence is so intense, it looks as though his head will burst right off his neck.