Once again, Monday Artday is using one of my suggestions as the weekly challenge. The challenge this week is “my hometown”  illustrate something specific to the city you live in or the city you are from. 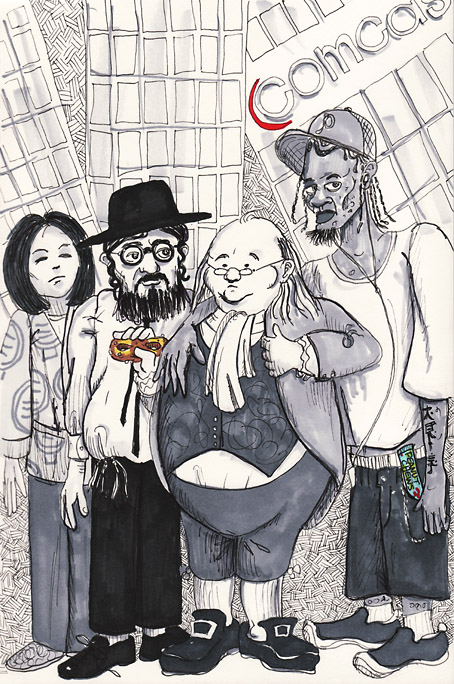 Funny. When I make suggestions for topics, you’d think I’d have an idea in mind. I don’t. Not at all. I actually came up with this idea when I was driving to pick up my son at the radio station where he works in Philadelphia. He does not drive (by choice), so on Sunday nights, I drive from the predominantly white, predominantly Jewish, predominantly affluent suburb of Elkins Park, through an interesting array of neighborhoods, to West Philadelphia….. and it got me thinking.
Philadelphia is the sixth largest city in the United States. For such a large city, it is merely a series of neighborhoods all strung together by the Delaware and Schuylkill Rivers. The neighborhoods are mostly formed by ethnicity, religion, culture. Philadelphia has the second largest Irish, Italian, and Jamaican populations and the fourth largest African American population in the nation. Philadelphia also has the fourth largest population of Polish residents and the third largest Puerto Rican population in the continental United States. Philadelphia has one of the largest populations of Vietnamese, Cambodians, Chinese, and Koreans in United States. Philadelphia also has the fourth largest population of Indian Americans. The city is one big melting pot in the truest sense of the concept.
Besides that we have soft pretzels, Peanut Chews and we’re the home of Comcast.
Benjamin Franklin lived here.
We have a big bell with a crack in it.
And our baseball team hasn’t won a World Series in twenty-eight years.